For the entirety of 2021, Powell kept a big secret from us; he didn’t want any market panics before the time of his re-confirmation. Instead of giving it to us straight and without subterfuge, he wanted to delay the inevitable, as much as he could, repeating the “Inflation is Transitory” outlook. He didn’t raise rates, while justifying it by signaling that the recovery is fragile and that we cannot take the foot off the gas, in the middle of an uphill climb.

Once the confirmation for a 2nd term rolled around, though, the market peaked.

As you can see, Powell’s meeting with Biden was held in early November and that’s when the NASDAQ 100 peaked; just days later, the S&P 500 peaked, followed by the Dow Jones Industrial Average. The more domestic-heavy Russell 2000, which is comprised of mostly U.S.-centric companies, is already in bear market territory.

Markets have come to grips with the fact that the FED had lied in 2021 or just purposefully delayed the tightening and is now adjusting to the imminence of rate hikes and balance sheet wind-off.

We are entering a stage that’s not like 2016, when we the labor market were slowly getting better and inflation was muted…

We are not entering a stage similar to 2004, when inflation was lower and financial markets were trading sideways and interest rates were already heating up the house bubble…

This period has no true historical precedence and this is why the lack of trust in the FED and in the government is expressing itself in the stock market; everyone knows this is a really tricky situation.

For the first few days of the month, the fear was that the FED would tighten, in order to curtail inflation, but it would also cause more problems in an already-slowing economy. However, after Microsoft and Apple reported the best fiscal quarters in U.S. corporate history, and after Tesla was also able to masterfully navigate supply chain bottlenecks, and after Visa and American Express’ earnings confirmed the consumer is not tapped yet, the anxiety over a recession alleviated yesterday.

In fact, with the GDP data that came out, the fear of a recession is all but gone and the markets are going back to focusing on their chief concern – that of a lack of firm action from Washington to solve port congestions, trucking and logistics shortages and the chip crisis.

On Friday, the markets closed with a massive rally, because Biden made it clear that he is waking up. But investors will want more from Washington before they can properly trust that the policy of the FED to ease inflationary pressures won’t coincide with government inefficiencies. 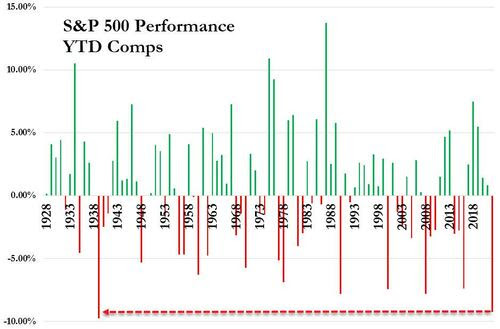 Inflation can be influenced to the downside by FED policy; raising interest rates does make borrowing costs more expensive and is crucial to bring down prices, but the FED can’t control the behavior of the average person that much, simply by raising interest rates by 0.25% or even by 1.00% — the government must put the right structures and incentives in place to get these supply chains functioning.

Think about a gourmet meal in a Michelin-Star restaurant; every dish served is prepared by four or five chefs, each focusing on a particular aspect of it, and if one of them is not doing his part, the other ones, even if they’re perfect, won’t be enough to create a memorable bite.

The markets can’t meaningfully rally and appreciate again, resuming a bull market, without more clarity. I don’t think we will get it until the summer, after the FED already has hiked in March and June and we see positive data from CEOs, praising the trend of ending the labor shortages and getting more people to come back to work.