Since 2008, the DXY index has been in a bull market. This has been one of the most intriguing and hated bull market runs, filled with doubters and detractors, all along the way, but today the dollar is the world’s most loved asset class.

Wall Street has crowded into the dollar and into short-dated Treasury bonds and now we’re seeing the first cracks in the dynasty.

On August 31st 1997, the official story was that Princess Diana was killed in a car accident in Paris, but since the very first moment, many claims have been made about how the official tale of the account makes no sense.

Those who have raised eyebrows have presented mountains of data about the timeline not fitting the published records, the weird ties of the driver to the Mossad and other intelligence agencies, the motives of the British crown to take Diana out due to various reasons, and eyewitness testimonies.

I’ve looked into the case for hours and hours and the most important conclusion I’ve reached is that the popularity and legitimacy of the British Royalty peaked with the rumors that this was no accident.

Many still maintain she was whacked by powerful forces with lots to lose, had she stayed alive; Princess Diana herself expressed her concern that they would have her assassinated, as she posed a threat.

Doubt is all you need to instill in the minds of the public in order to start them on the path of taking the red pill and seeing behind the curtain for the first time.

Going into Thursday, Wall Street was convinced that the CPI report would come in hot, but it didn’t. In fact, it was the first crack in the narrative where the FED will need to resort to the policies of Paul Volcker, if they’re ever going to stop the borderline hyperinflationary pressures in the economy.

I explained it to my wife in the following manner: Imagine I bought you a new car and it had just too much horsepower for you to handle. For a full year, you’ve been bumping into curbs and scratching other vehicles, and all the while, I refused to do anything about it, because I promised you it was temporary and that the car would improve and you would sort this out.

Then, after a year of small collisions, she finally had a big crash and I realized that the car was just too fast and too exotic for her, so I began to aggressively limit the speed and the thrust of the turbo charger.

At first, it didn’t do anything to help, but eventually, after nearly 18 months, at long last, she had a collision-free month, the first real sign of progress.

The car has scratches on it and a minor paint job is needed, but she didn’t have a fatal injury and we ultimately got the car to where she could drive it.

This is the process of hiking interest rates into an overheated economy and ultimately getting the encouraging October CPI report.

I want to show you how beautiful this breakout is:

The trend is especially clear with silver, which is nearing $22/ounce again! 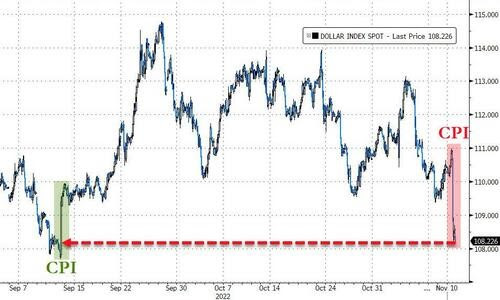