What’s Next for Europe

Both in 2018 and 2019, I visited Kyiv. My wife’s father is Ukrainian and my wife was born in Ukraine and left the country with her mother and brother in 1999, when she was 14 years old. They came to Israel, like over one million others, after the fall of the Soviet Union in 1991. We met each other just six years later, in 2005.

Since her father had stayed in Ukraine, we visited him both in 2018 and 2019. He happens to live in Eastern Ukraine, right at the center of this conflict.

When we visited the gorgeous city of Kyiv in 2018, we rented an Airbnb apartment right on the famous square where the protests were taking place, as the county’s citizens made their voices heard.

The area is historical, beautiful and full of life. Our second visit, one year later, was even nicer, since we already knew our way around. Her father took the train to Kyiv once more, a 10-hour ordeal, which he was more than happy to do, since he missed his granddaughter and of course, my wife (his daughter).

Every morning, we strolled through the city’s beautiful parks. As the day progressed, we toured the city’s must-see sights, shopped in modern malls and loved the atmosphere. At night, we dined at amazing restaurants and went out to cocktail bars and rooftop lounges.

I thoroughly enjoyed my time in Kyiv in September 2019, and my wife and I decided to book a few days in Moscow in December 2019, right around Christmas and New Year’s Eve.

Moscow is one amazing city!

It was snowing and freezing-cold and the main street was turned into a festive Christmas party like no other. To think that war is waging between the politicians residing in these two cities and that other nations are involved, via diplomacy, when I was just there a few years ago, and to think about my wife’s father, caught in the line of fire once more, is a reminder that if countries and elected officials can’t communicate with each other properly, civilian casualties are still a possibility in 2022.

I know it because I reside in Tel Aviv, a city that many people around Israel would like to see topple over, so I don’t need a reminder of how military threats do exist and that, just one year ago, bombs were going off over my head.

Like all long-dated conflicts, the Russian-Ukrainian one goes back decades.

The sight of tanks in the streets of Ukraine and the imposition of sanctions on Russia’s economy are the result of a brewing crisis, which originated in the 20th century.

Goldman Sachs, which measures geopolitical tensions, is claiming that February 23rd‘s risk level was the fourth highest since I was born in 1984: 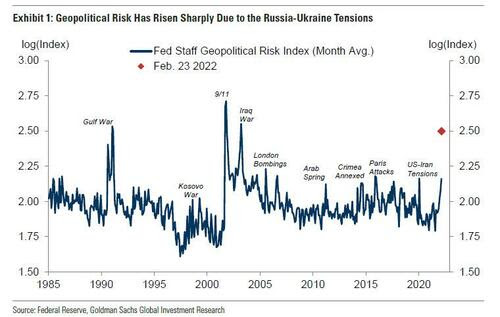 When thinking about all the things that the market has already had to undergo since November 2021, I can’t help but think that it would take a full-blown disaster of epic proportions to crash stocks further.

Whoever wanted to sell could have done so a million times.

I am extremely bullish on stocks, but I think that the market isn’t ready to rally yet.

Gold is also really interesting to watch, because with the tense geopolitical situation, if we see it climbing towards $2,000/ounce, it could spell a windfall of profits for the mining stocks.