Not one media outlet has focused on some truly disturbing words, uttered by FED Chairman, Jerome Powell, but he has made some comments, which have put into question the sanity of the central bankers at this stage of the cycle.

Jerome Powell has a net worth of over $100M, making him a genuinely wealthy central banker, as opposed to his predecessors, so we know that he is not only an academic economist, seeking to engineer the global financial system, from the comfort of his own office, operating under the illusion that it can be done.

He actually knows what it takes to make a fortune.

With that said, I’m even more bothered by his recent comments.

It wasn’t that long ago that Powell indicated to the markets that we’re a long way from achieving normalized interest rates for the economy. That’s true. Historically, the average 10-yr bond has yielded close to 6% over the years.

It is hovering around 3% today, with inflation right around 2.5%, so lending the U.S. government money isn’t a compelling investment whatsoever.

Therefore, China, Japan, India, Turkey, and Russia have been dumping Treasury debt, which is obviously critical for every American, since without foreigners, retirees can forget about Social Security, Medicare, and Medicaid, while struggling folks can say goodbye to income security and food stamps.

All of these social programs are funded, to the extent of 40% of their cost, by foreigners, so every American president has made a point of being diplomatic to its largest creditors, but not this current one.

The way I see it, President Trump has come to terms with the chilling fact that the United States of America stands to lose its economic supremacy by 2027, and to lose its prominence, militarily, by 2035.

This may seem like it is far off into the future, but you must realize that political alliances are formed with a 20-yr outlook, if not more. National budgets are altered to reflect this, diplomatic priorities are shifted, troops are deployed to new regions, agreements are inked with key leaders, and economic bargaining is made to ensure prosperity, all with the agenda of feeding on the new superpower, whoever that may be.

I’m an advanced open-water scuba diver. Underwater, there are many amazing relationships, which will strike us as weird for humans, but work perfectly in our vast oceans.

One such alliance is the one formed by a large whale shark, which can be seen traversing the waters, and the school of smaller fish, some the size of a child, who are cleaner fish, feeding themselves this way, while accompanying him.

It is a magnificent sight. In the same way, in the dirty world of global diplomacy, less stable countries must leach on to the dominators, to service them.

Since the end of WW2, the U.S. has been the only major cow that needs much grass, the whale that other fish clean; the economy that is serviced by all others. All countries have been happy to supply the U.S. with goods, services and resources.

The U.S. also produces plenty of useful milk itself (Corporate America is thriving), but now another cow, younger and hungrier (China), is headed towards the grass field.

The G-20 summit, held over the weekend, showcased the first real duel for territory over the field, with large media coverage.

The fat, mature cow (USA) is very reliable because everyone knows what it likes to eat and what its milk tastes like, but in the past two years, it seems that it is not happy with the grass it is provided (the way other countries trade with it), and it wants to produce a different type of milk (build a manufacturing base again and bring jobs home).

President Trump understands that a fat cow (rich country), especially the age of this one, can get slaughtered, if it is not careful (get overpowered by BRIC countries: Brazil, Russia, India, China and South Africa), so he is causing a commotion with the purpose of ensuring that no one tries to take over his grassy fields.

The USD, by way of the reserve currency status, has allowed Americans to have continuous access to credit, which they have exploited to their benefit. Americans have enjoyed a higher standard of social benefits than what is possible for other countries, which do not have access to such willing creditors.

Massive deficits are the primary cause of U.S. Dollar bear markets, on the flip side, though, as the chart above clearly demonstrates.

The reason that Jerome Powell made my partners and I view the upcoming month as crucial is that he changed his tune regarding interest rates, from stating that there’s a long way to go until hiking will cease, to now saying we’re close to neutral levels.

His reason, though, is a strikingly shocking one. As we see it, economic historians will cite his statement as his fatal error of judgment.

Jerome Powell said that the central banks have figured out how to keep an economy functioning like a Rolls Royce engine, with low unemployment rates, stagnant wages, all the while containing inflation levels, keeping them low, permanently.

Whenever I hear any statement, uttered with such confidence, about the miracles of “this time it’s different,” I take one step back. 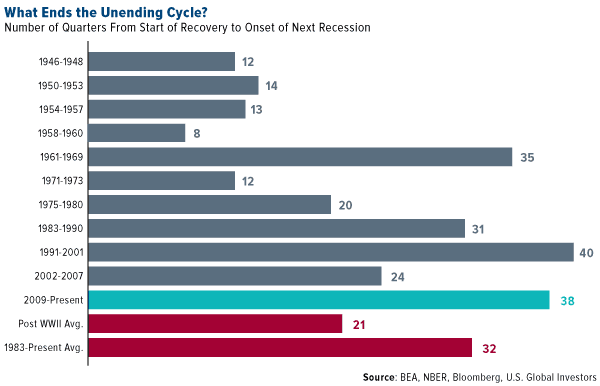 This statement will be carved on his biography, since it will define the stupidity of central planning, which is under the impression that they can maneuver cycles.

The G-20 meeting will set the tone for the global cold war between the Chinese block and the American one.

Jerome Powell’s policy will determine how soon the expansion cycle will live on, how fast the U.S. dollar will dive into a bear market, and how soon the gold sector will erupt again.