It was right after my three-year mandatory stint as a combat soldier in the IDF that my friend and I decided to backpack through New Zealand and Australia.

Originally, we were going to travel a full year, then it shrunk to six months, but while we got to planning the route, I met my future wife. She was gracious and kind enough to explain to me that she’d wait for me, since this trip was already in motion and my friend wanted it to be “a guy’s adventure.”

That plan went right out the window with the first female he had a crush on and invited to join us, but I digress…

The day we left for Auckland, the trip was already shortened to four months, because I just couldn’t see myself having the time of my life, while Anna was waiting at home.

My friend and I landed in Auckland and booked two seats on a tour bus that took 40 of us around the Northern Island, exploring the sights and getting to know each other. There were people of many nationalities on the bus and it was a fun experience, but we were keen to rent a car and do some of our own exploring.

One night, while we were driving between small settlements, we couldn’t find a gas station. Our tank was running low, like super-low, and we were really pushing the limits. We both stared at each other, not knowing whether to laugh or panic, as we knew the car might stall soon after that low-fuel light went on.

We knew car manufacturers designed this warning signal to flash a few dozen kilometers before the car actually runs on fumes. I was driving the vehicle and doing my best to manage the throttle optimally, so that we wouldn’t need to pull over and sleep on the side of the road in sleeping bags, with the seats pulled back.

Suddenly, my friend told me, “Lior, I am nervous about this. I am going to fall asleep and when I wake up, we’re either fueling up at a pump, or on the curb, setting up for the night… I can’t watch this, though.”

I started humming and singing softly to myself, and what one has to realize about New Zealand is that between the various smaller towns, there can be miles and miles of open country, with only the lamps on the car as a source of light. Otherwise, it’s pitch-black; many roads are not lit.

After 40 minutes of driving, not knowing the situation in the tank, I saw glimmers of light! We’d reached a populated area where I saw signs of “Subway” and a gas station. We were home-free.

In hindsight, we’d worried over nothing, because we did take precautions, by throttling in an effective fuel-burning manner. We also got very lucky that the town wasn’t another 10-15 kilometers down the road.

Luck, preparation and execution got the job done. It could have all been avoided, had we filled her up before leaving the last town, but we didn’t, even though it was a basic logical tactic to implement.

The Federal Reserve, the government’s chief economists, Wall Street’s best analysts, everyday Americans, billionaire businessmen and investors, and practically anyone who can see the writing on the wall, understands that just like my friend and I were in a plight, the U.S. economy could also run out of steam and come to a full stop before reaching the safe harbor it seeks.

Bloomberg is pricing a 98.489% probability of a recession within the next 24 months! 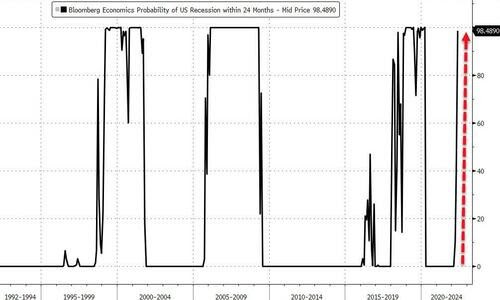 My friend was SURE and CERTAIN that the fuel wouldn’t last and that we’d be stuck in the middle of nowhere and buried with our heads in the sand. I took action, read the car manual and realized what was the most efficient fuel-burning RPM and speed and got us to the destination – a SOFT LANDING.

This past week, I believe that Powell’s two-day Senate testimony really hit home for congressional members that raising interest rates won’t be enough, and that their policies, fiscal regulations, taxation and incentive programs must also be included, if the economy is to land softly.

The markets seem to be turning higher, and if the trend continues, the next step is a DOVISH PIVOT, which will send gold over $2,000/ounce!