Ten years ago, in 2008, an old train, with many problems that have to do with (1) its crew’s motivation levels, (2) its engine’s condition, (3) its structural strength, and (4) its ability to absorb braking shocks, left the station. Since then, using artificial methods and short-term fixes, some very conniving people have convinced the unsuspecting passengers that the train is as good as new.

In fact, save for a minority, which are looking under the hood to uncover the mess, or hearing the sound of screeching brakes every time it comes to a stop and the chatting of its crew about how dire the train’s predicament is, whenever they don’t notice passengers are listening, the majority are comfortably seated on the ride to oblivion, not doubing a thing.

Since the rail system, leading up to this cataclysmic dead-end goes through majestic scenery, all of the passengers are distracted with taking pictures, not minding that the rail system is ending, soon.

This is an accurate picture of the global economy.

In this analogy, the old train is the U.S. economy. The crew is comprised of its government in Washington, its central bank, and its elite shadow government, which have sold their souls many years ago and have no desire to put in the real work that is needed to replace this train with a new one.

The short-term fixes, which make the train run seamlessly for brief moments are maintenance repairs only, but they’re done so frequently that it looks like the strategy could last forever.

These are the bailouts adn TARP money, QE programs, interest-rate lowering, tax cuts, and corporate lending, for the purpose of massive buybacks.

The minority, which has been shouting from the rooftops that this train is headed for utter destruction, a complete ruin and a crisis ending to the journey, have been laughed at by the thrilled passengers, who have enjoyed the ride, without any obstructions.

The enlightened prophets of doom are those, who have studied and understand the problem the train faces. They are called sound money advocates in the real world. They know that a debt crisis can’t be fixed with more debt.

This enlightened camp is separated into two factions. One group won’t get on the train, no matter what. These people have lost all faith in the train system. In the real world, these are the people that only own tangible assets, shun away from all fiat currencies, and are weary of all paper assets. Then, there’s the second group of enlightened and fully-aware investors.

These investors have also recognized the shenanigans of creating money out of thin air, paying for the federal budget by issuing more bonds, and when there aren’t enough buyers, asking the unconstitutional Federal Reserve to buy the bonds.

They also know that the train will one day derail and that all its components need to be examined, looked at, and replaced, for the most part. But they don’t want to miss the beautiful scenery in the meantime, either.

In the real world, these are people like billionaire Ray Dalio, who is an expert on debt cycles. He compares the world today to 1938 and has a huge gold position, but instead of prophesizing doom from the side of the road, he has found a seat on the train that allows him to pull out when he sees major challenges coming or the end of the rails, entirely.

Knowing the train is unreliable, but still functional for extended periods, as opposed to deeming it useless, prematurely, is the difference between well-informed rich investors and frustrated gold bugs.

In other words, it’s the difference between owning cash-flowing dividend growers and other enriching stocks, alongside precious metals, instead of hoarding only gold and silver, disregarding the power of compounding dividends.

Right now, we’re entering one of these challenging periods for the train. It has been running at full steam ahead for three years. The crew has tried to slow it down, but the passengers complained about the abrupt stops. In the real world, this is akin to the rise in interest rates that was too fast and aggressive, which led to the December 2018 sell-off. 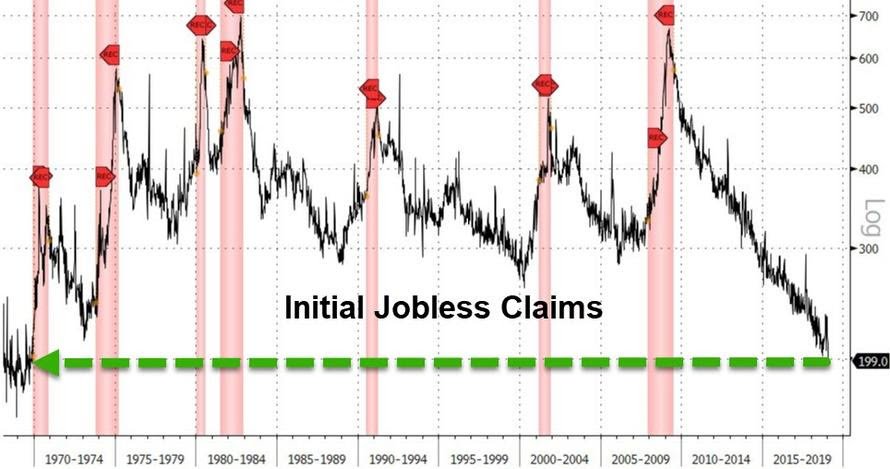 The train is going fast right now. The economy is super-strong. People are working, and wages are on the rise, but the MATERIAL change in lifestyle is minimal for the working class.

When employees get an additional $2-$3 an hour, they don’t move to Malibu.

People are still struggling, but, at least, they have more food in the fridge and are less concerned about filling the gas tank.

When the economy is this strong, there is only one thing for the train conductor to do next – hit the brakes.

In the real world, it means that we’ll see the Federal Reserve considering easing again.

Not in a million years is this easing and renewed cutting of interest rates, priced into the stock market at this moment, otherwise shares would be 10%-20% lower, at a bare minimum.

For those hardcore gold bugs, this is the most important celebration. For the sound money advocates, who also use the train (the second group), it is another confirmation that their cameras must be tucked-away and that they should be identifying the emergency exits, instead of enjoying the view from the train.

In other words, they should be selective about making new investments, especially with growth stocks and should be watching their cash position to have options, when the market corrects again.

For the majority, who are oblivious to what’s going on, gold’s move to $1,303 this past Friday means nothing, since they haven’t even heard about it. My mother, for example, called me yesterday to tell me she wrote a financial article, “the first in a number of years,” as she said, and that “Washington is running a printing press.”

It is so strikingly surreal to realize that even after I’ve been telling her about this since 2008, she is now only giving the subject any attention, but this is a case study that represents the majority.

Most people are going to bleed out, following the train’s derailment. Don’t be one of them. Instead, find your place in one of the two groups. In the real world, the enlightened, which also use the train, opportunistically and cautiously, are those, who have enjoyed the rally in the stock market for the past 10 years.

Gold bugs have seen the price of gold go from $250 to $1,300. Both groups have been on the winning end, but the train hasn’t suffered from its Armageddon yet.

2008 was a close call, but the crisis didn’t play-out to the latter. Next time, bailouts would be a political suicide and I expect a witch hunt, instead. People will want scapegoats.

When the crisis occurs, the blinded passengers, who have already noticed some changes, such as the fact that the air-conditioning isn’t working, that the view is becoming less scenic, and that the food on board lacks taste, will pay the price for their complacency and mental laziness.

In the real world, this is akin to middle-class America, which knows the train isn’t what it used to be, but they aren’t, as a class, taking drastic action to combat these negative changes.

Those, sucked into the matrix, part of the herd of sheep, who believe the mainstream media propaganda, the ones, who see life through a straw, will have their Aha moment.

In life, as with investing, cause and effect aren’t instantaneous, but inevitable. The currency crisis doesn’t have to happen today, but it is, nonetheless, imminent.