Opened a Can of Worms

If any Federal Reserve staffer is reading this, know that we know that Powell is now facing his darkest hour. Wall Street now realizes that supply chain congestions have been greatly reduced and we STILL HAVE very high inflation.

In other words, Wall Street and Wealth Research Group now expect an apology for getting the inflation source all wrong; clearly, Powell pinned it on supply chain woes and re-opening birth pains, but it is now obvious these were never the origin or ground zero for the pressures on food, gas and shelter prices. Now, the WHOLE WORLD can see the Federal Reserve standing naked, without much credibility.

The FED is very much like a strong but not-so-competent emperor, whose powers are well-known… yes, we all know Powell controls a very forceful lever on the economy, with interest rates policy and his balance sheet. However, he is not refined or highly sophisticated, so he’s often late and unapologetic when making big mistakes.

Jerome, we hope you still kept some of your old contacts at Goldman Sachs and that they forwarded you this chart, or that you go on Twitter once in a while, and see some of the great data presented on it, because you’ll see this: 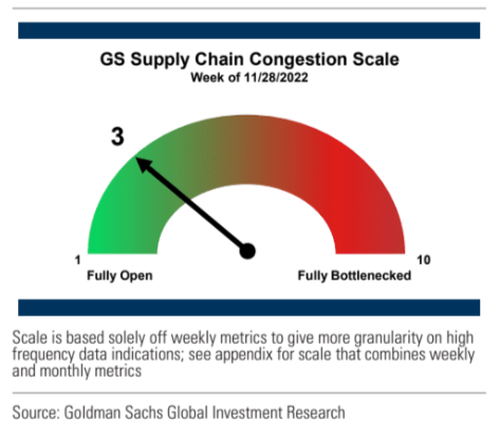 The Federal Reserve acts in a manner that we call elimination: It develops a theory about a topic, examines and isolates it, then assesses if it was right or wrong, moves on, creating collateral damage along the way until it finally has a grasp of reality – then its policy is in line with the free markets, until it isn’t again.

Supply chain bottlenecks have been eliminated from the possible list of catalysts for the 40-yr high inflationary environment of 2022… they played a role in getting CPI to where it is, but they weren’t the leading cause of it and we now KNOW THIS for a fact.

This is why Wall Street is buying gold…

All of Wall Street now knows that the Federal Reserve has played its hand, hiking interest rates in the most aggressive way, but the real cause of inflation isn’t solved because container freight prices are collapsing.

Therefore, Wall Street does feel the need to hedge for sustained inflation for the first time since 2009!

The last chart I want to show is quite interesting, and I must say that it shows the world is entering a GLOBAL RECESSION. This is another reason we think gold is headed to a record year in 2023:

This is the FIRST-EVER global yield curve inversion, and what it means is that Wall Street is bracing for a massive slowdown, which has incredible positive correlations with a great precious metals bull market.

The real cause of inflation has to do with global disruptive forces and with unstoppable demographic trends that aren’t changing anytime soon.