Volatility has been so low throughout 2017 that we became accustomed to waking up every morning and seeing our portfolios gaining in value on a daily basis.

Last year was the most uneventful in history in terms of swings for the S&P 500. The VIX, which is the fear index, broke record lows. Analysts across the board began saying that we could be entering a massive rally phase for the U.S. equities in 2018-2019 and many are now bullish, calling for a blow-off top and another 60% move to the upside.

In fact, the American Association of Individual Investors surveyed the most bullish sentiment since the Dot.Com bubble. 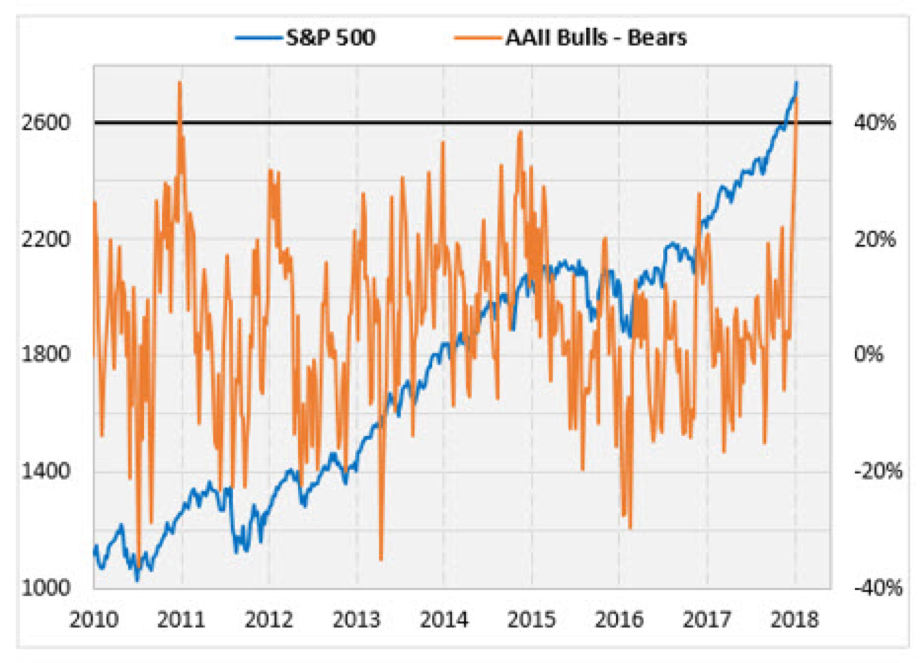 If you want to see rookies in action, notice that of all things, now, after the S&P 500 has already risen to its highest level in history for 9 consecutive years (a 217% return), over 60% of investors are bullish on the stock market all of a sudden.

This 60%+ mark is a critical psychological barrier, which doesn’t occur too often. Therefore, I suggest you tighten the belt with any investments you’re considering in the broad economy. Buying an index today means you’ll be joined by amateurs, not the smart money.

In fact, two of the world’s best bond traders – billionaire Bond King, Bill Gross and billionaire Bond God, Jeff Gundlach, are both bearish on stocks. On top of that, they see bond yields rising from here, which means they are calling the end on the longest-standing bull market ever – U.S. Treasuries.

The numbers to track closely are the FED Funds Rate compared to the 5-yr Treasury, because when the central bank raises rates above the 5-yr bond, the stock market peaks, historically.

Secondly, both the 2-yr and the 5-yr bonds are yielding more than the S&P 500, which means that when stocks go through their next dip, institutional money will prefer to buy bonds, instead of buying the dip – this is a major change compared to the fact that investors had no alternative for income for close to a decade, other than stocks.

The economy is at a tipping point and what happened yesterday was a knife stab right to the heart of the U.S. economy.

I’m talking about China, who holds the world’s largest foreign-exchange reserves, at $3.1 trillion. 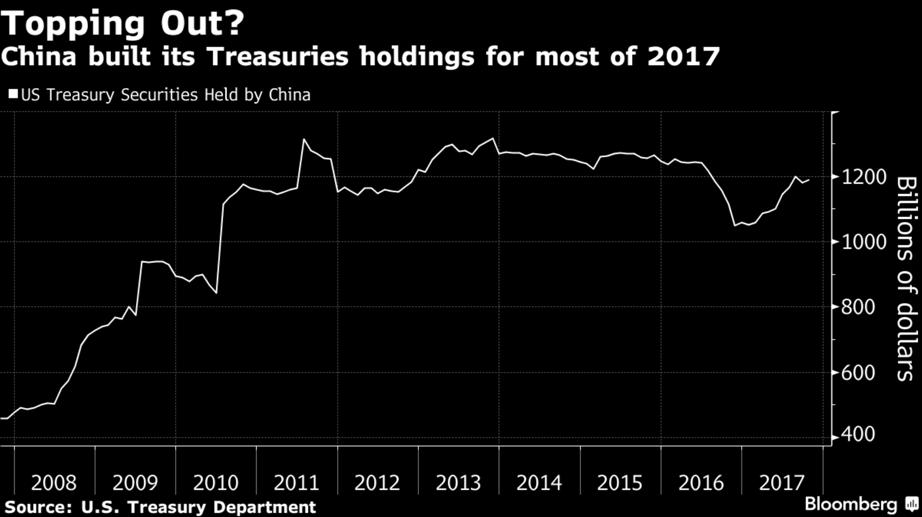 After you’ve had two meaty steaks, the 3rd one doesn’t taste so good, even if it’s free.

The Chinese have accumulated over $1.2T of bonds (2 meaty steaks), which the Federal Government has issued in order to pay for deficit spending and the lavish lifestyles of far too many parasite politicians and officials in all ranks of government.

President Trump has shown his cards to the world by cutting taxes and relying on new debt issuance to pay for the budget over the coming years – China sees the opening and signals to the U.S. that nothing gets done, unless they come to the auctions and gobble-up the newly-issued bonds (the 3rd steak).

This is propaganda warfare – China is telling the world there’s a new sheriff in town.

The announcement from China is that they’ll reduce, halt, or even sell, from now, treasury bonds that they own.

For years, even decades, the Chinese have built up a >large gold reserve and a vibrant mining production – today marks a nail in the USD coffin. It means that the standard of living for every American is at risk, effective immediately.

I’ll have a full update for you on Sunday, but I can tell you that as of now, commodities have historically been the best performers in similar past scenarios, and if we get a confirmation tomorrow, with the release of CPI numbers and soon the GDP data, the rally could rival what we saw in the early 2000’s.

This is the potential at hand and we could be weeks away from seeing the birth of this rally.