Do you know why the markets didn’t sell off harder after yesterday’s tax hike bombshell?

The reason is that no one believes this political theatre to be anything serious.

We live in the most competitive era in human history and the world’s fastest-growing regions have tremendous tax advantages already. If the U.S. government wants to get run over by the bullet train, they can keep talking about delusional tax hikes, which will never happen.

The United States doesn’t live in a vacuum and other regions will eat it alive, if it continues to attack its own capitalistic system with this kind of rhetoric.

We believe that this tax proposal was a negotiation tactic, where Biden wants to start so high that he could come down a lot and show how flexible and lenient he is.

We’re not taking sides; our view is financial and economic — tax hikes are better executed, when they’re gradual and well-communicated.

The biggest no-brainer, in our opinion, is to legalize cannabis, which 70% of the people support. It will put money in the treasury of individual states, will create thousands of jobs, will put America at the forefront of one of the fastest-growing sectors of the economy and will help the justice system in a massive way.

If that’s implemented, we believe that our largest position in this sector, BevCanna Enterprises (US: BVNNF), could benefit greatly.

By now, you know that we are bullish on it. We know that we’ve showed you the company from every angle and we know that you’re aware of its price, at the moment.

Keep all of these in mind! 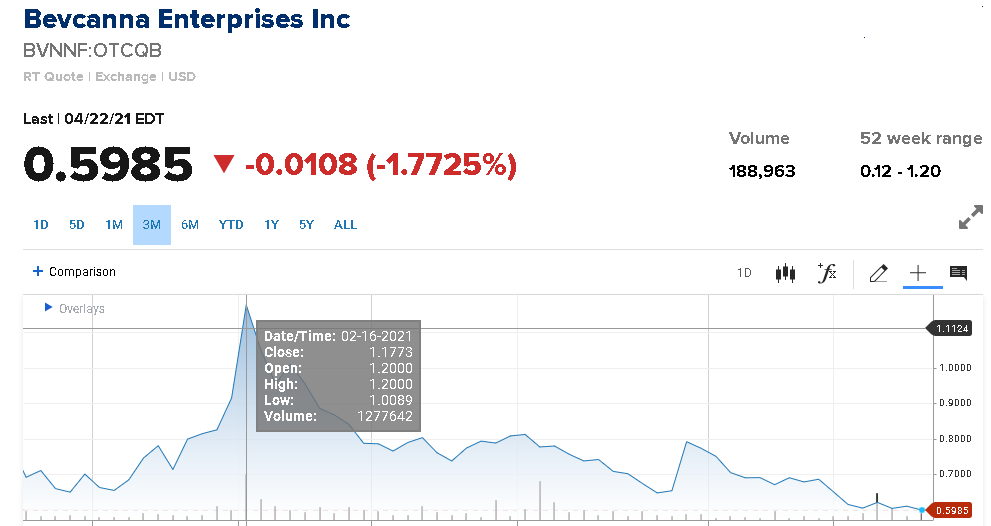 That’s it; do your own analysis on this situation.

We are not securities dealers or brokers, investment advisers or financial advisers, and you should not rely on the information herein as investment advice. We are a marketing company and are paid advertisers. If you are seeking personal investment advice, please contact a qualified and registered broker, investment adviser or financial adviser. You should not make any investment decisions based on our communications. On March third twenty twenty one, in connection with our agreement  with Bevcanna Enterprises Inc, we received five hundred thousand dollars. On March ninth of this year, we purchased two and a half million warrants, directly from the company. Examples that we provide of share price increases pertaining to a particular Issuer from one referenced date to another represent an arbitrarily chosen time period and are no indication whatsoever of future stock prices for that Issuer and are of no predictive value. Our stock profiles are intended to highlight certain companies for your further investigation; they are not stock recommendations or constitute an offer or sale of the referenced securities. The securities issued by the companies we profile should be considered high risk; if you do invest despite these warnings, you may lose your entire investment. Please do your own research before investing, including reading the companies’ SEDAR and SEC filings, press releases, and risk disclosures. It is our policy that information contained in this profile was provided by the company, extracted from SEDAR and SEC filings, company websites, and other publicly available sources. We believe the sources and information are accurate and reliable but we cannot guarantee it.
Please read our full disclaimer at WealthResearchGroup.com/bevdisclaimer