SHOCK AND AWE INFLATION DEAD AHEAD!

Government does not impact my decision-making process, and the way I am about to analyze and assess Biden’s SOTU speech is not politically driven; it is factual.

Biden could have stressed many issues; he had the floor for a full hour, but his team of speech writers and, ultimately, he himself, chose what to include, what to pound the table on and what to leave out.

To me, it seems quite obvious that if you don’t mention a single word about the need to raise interest rates fast and aggressively in your State of the Union address, and if you keep sticking and demanding that the failed and discarded Build Back Better plan be passed, you don’t really have a framework for beating inflation.

Personally, I believe inflation will begin to moderate because we are re-opening the world. The natural tendency of inflation is to level-off at much lower percentages than what we’re seeing now, but it’s clear Biden wasn’t putting pressure on Jerome Powell to come down on inflation with a hammer. It is also apparent that Washington is still delusional about passing the BBB plan. Inflation will remain an open wound for at least another two years, but the main sources of it are known and are being addressed and that’s a step in the right direction.

It ain’t gonna happen, unless Congress understands that it plays a role and, after yesterday’s Powell testimony, it seems like they sense the urgency to act.

Biden also didn’t say a single word about the markets and how horrific they’ve been performing in 2022; this, of course, is another sign that Democrats still want to raise the minimum wage, slap a 15% minimum corporate tax on Fortune 500 companies and make sure “the rich pay their fair share.”

I’m a client of accounting giants PWC and BDO and my neighbor is a top executive at E&Y, and I can tell you the rich pay taxes or they use strategies to minimize them, which everyone has access to; there are no secrets in the tax code. Even if you tax them at higher rates, this is not a formula for more productivity, which is how economies boom. America will increase their tax revenue, as the economy becomes more productive and robust.

The best businesses in the world are American and the best demographics in the world are those of the United States, which has over 40 million people in the age bracket of 30-40-year-olds, the most productive group in society in terms of breakout potential.

Biden’s administration has relaxed most of the health restrictions and I think that the market is TOTALLY OVERLOOKING the immense pent-up demand for living life, getting married, forming families, going back to work and building for the future, which will be taking place in the coming years.

It’s not all roses and victory laps… the present situation of the world is chaotic and irregular, but when I see what entrepreneurship is capable of, as I look at companies and their agility and ability to react and respond, it is overlooked by the brainwashed Wall Street bears, who are seeing doom and nothing else. 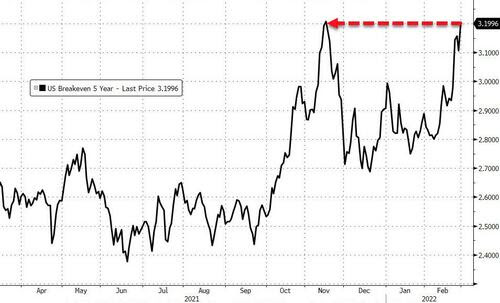 Our approach to the markets is so refined and fine-tuned that while the NASDAQ 100 has fallen by 20% from its all-time highs and the S&P 500 is trading in correction territory, our No.1 stock for 2022 is up 85% since mid-December and 60% year-to-date, proving that commodities play an important role in portfolio management.

As we approach $110/barrel of oil, Biden’s push towards electrifying the federal fleet is going to keep the lithium industry buoyant and, as the world continues to sanction Putin’s natural gas, uranium will continue to be coveted…

Gold, silver, lithium and uranium are all seeing a great 2022; because of oil’s multi-year record prices and because inflation will be with us for MUCH LONGER than previously thought, staying LONG on commodities is a money-maker!