I’m sure you’ve heard about or even seen with your own eyes how some families can give the appearance of an amazing, wholesome household, yet, beneath the disguise, once you take down the screens, the truth is that it would not surprise you in the least to see the package splitting up!

I can’t tell you how many of these family units I’ve encountered and concluded that it’s a ticking time bomb.

You can’t conceal things for long; I remember when my wife was pregnant, she specifically asked me not to tell anyone, but it didn’t take long until her belly was showing.

No matter how much the markets may be celebrating new highs and how the European indices are currently breaking out and making incredible moves, consumer sentiment, which comprises 70% of GDP and represents the real economy, just collapsed!

It’s so bad that the just-released reading shows the sentiment is worse than before March 2020!

In one of my prior business cycles, I got to see families at home in their natural states, when they didn’t need to project an image to the outside world. I heard quite a bit of shouting, but it’s rare to see a mother lashing out at her children in public, when all this family normally broadcasts are hugs and kisses.

This latest consumer sentiment reading, just released, is like a mother throwing a temper tantrum on her children in the middle of a school party – the witnesses are everywhere. 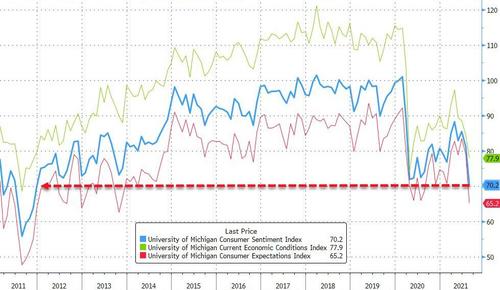 In the army, the point of running an ambush or a sneak-attack is to possess the element of surprise, but once the enemy has made you, the game immediately changes.

The advantage of being camouflaged and concealed is gone and the battle is on. Now, with consumers expressing that they are preparing for a major slowdown, I reiterate my call that cashing-up, that is, accumulating income and saving it (instead of rushing to deploy it), is going to prove itself to be effective.

In a few days, once the LIVE PORTFOLIO tab is up and running, you’ll see how my portfolio is allocated, percentage-wise, between the various stocks. Notice also that the NASDAQ 100 ETF comprises 8.26%, the NOBL ETF (focused on dividend companies) makes up another 13.59%, while the SPY ETF (S&P 500) consumes another 13.4%.

I fully understand the importance of indexing, simultaneously with picking individual stocks; this strategy is what allows the portfolio to grow in today’s environment, when indices perform very well, even while many stocks are falling.

But, when I look at the following chart, I realize just how dependent on liquidity the stock market is: 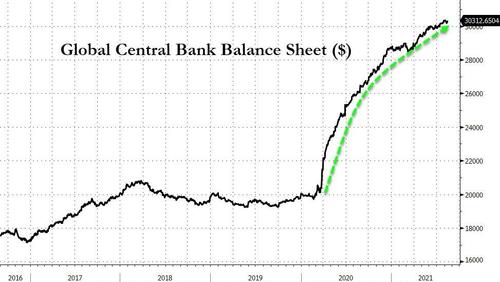 Are you wondering how the stock market keeps seeing record highs, even with lower volumes? Is it really a shocker to you that real estate prices are in bubble territory again? Should we be stunned by the rampant speculation in cryptocurrencies?

This chart deserves a 30-minute meditation; the ramifications of what central banks have done are mind-blowing!

We are not securities dealers or brokers, investment advisers or financial advisers, and you should not rely on the information herein as investment advice. We are a marketing company and are paid advertisers. If you are seeking personal investment advice, please contact a qualified and registered broker, investment adviser or financial adviser. You should not make any investment decisions based on our communications. Examples that we provide of share price increases pertaining to a particular Issuer from one referenced date to another represent an arbitrarily chosen time period and are no indication whatsoever of future stock prices for that Issuer and are of no predictive value. Our stock profiles are intended to highlight certain companies for your further investigation; they are not stock recommendations or constitute an offer or sale of the referenced securities. The securities issued by the companies we profile should be considered high risk; if you do invest despite these warnings, you may lose your entire investment. Please do your own research before investing, including reading the companies’ SEDAR and SEC filings, press releases, and risk disclosures. It is our policy that information contained in this profile was provided by the company, extracted from SEDAR and SEC filings, company websites, and other publicly available sources. We believe the sources and information are accurate and reliable but we cannot guarantee it.Please read our full disclaimer at WealthResearchGroup.com/disclaimer​