Wealth Research Group views Predictions as next to useless, as everybody’s got an opinion on where the markets are headed NEXT. Time and again we see analysts and talking heads giving their views and prognostications, and it’s impossible to know whom to listen to anymore.

The precious metals markets are no exception, where price targets are common and everybody thinks he’s an expert.

But when Keith Neumeyer talks, people listen because they know his reputation and his extremely accurate market calls. They know that he has more experience and expertise than just about anybody in the precious metals markets, and they take his price targets seriously.

Earning this level of respect is the result of decades of hard work and dedication in the precious metals markets. Keith Neumeyer first began his career way back in 1984 when he worked for a number of Canadian national brokerage firms. Then he moved on to work with several publicly traded companies in the resource and technology sectors; these roles have included senior management positions and directorships in the areas of finance, business development, strategic planning, and corporate restructuring.

Mr. Neumeyer is truly a visionary and a company builder, having raised over $300 million and achieved multiple company listings on the TSX and the NYSE. Keith is also the original founding President of First Quantum Minerals Ltd., which has evolved into one of the largest copper producers in the world.

Mr. Neumeyer’s track record is truly unparalleled, as very few individuals can build world-class mining firms like he does. It was in 2002 that Keith founded First Majestic Silver Corp. (TSX: FR, NYSE: AG), a world-famous mineral property holding company that is focused on the Americas and Mexico in particular.

Today, First Majestic owns six producing silver mines and is achieving its corporate growth objectives by aggressively pursuing the development of its existing mineral property assets as well as pursuing the acquisition of additional mineral assets.

Currently Keith Neumeyer is also the founder and the Chairman of First Mining Gold (TSX: FF, OTC: FFMGF), an emerging development company with a diversified portfolio of gold projects in North America. First Mining Gold has numerous successful mining projects focused in Eastern Canada, such as their Cameron and Goldlund projects, along with the massive Springpole Gold Project, the largest undeveloped gold project in Ontario – it’s also the seventh largest in Canada, and the eighteenth largest in North America:

There’s no doubt that Mr. Keith Neumeyer has something to say about the precious metals markets, and that his assessments of these markets are to be taken very seriously. Wealth Research Group is always looking to Keith Neumeyer for sanity in the wild worlds of metals and miners. Longtime investors and traders alike are constantly on the lookout for updated price targets on gold and silver from Mr. Neumeyer.

Listening to Keith Neumeyer when he makes a statement about gold or silver is certainly a good idea for any precious metals investor, and fortunately for us, Keith is unafraid to express his viewpoints on metals and mining in 2008. Folks are clamoring for some clarity and stability in precious metals, especially with gold and silver stuck in a range and heading towards the bottom of that range. Long-term resistance in the mid-1300’s has frustrated many gold investors:

Silver stackers have been equally hit by price resistance, with spot silver being stuck in the teens since 2016: 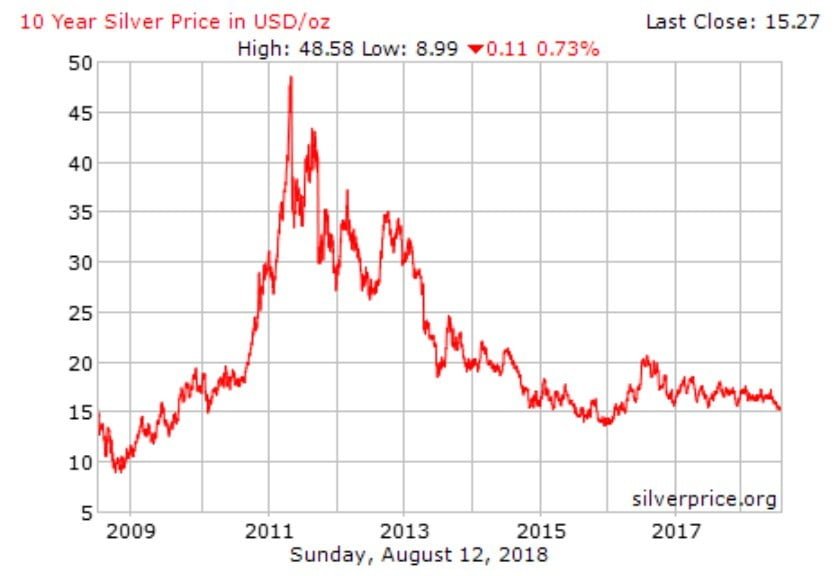 But before despair sets in, let us look at the facts surrounding these metals. Gold and silver have been a secure store of value and the ultimate form of money for over 5,000 years; you just won’t find a better safe-haven asset in the world than these metals.

Gold is a great hedge in a time when government debts are skyrocketing, as gold and debt tend to move in the same direction over time:

With gold and U.S. debt having such a strong positive correlation – and with no doubt that the debt is just going to grow bigger and bigger – gold ownership is as secure an investment as ever.

As for silver, owning this precious asset is as safe a bet as it has ever been. The facts and statistics bear this out: silver remains one of the world’s most reflective and best conductors of electricity, and over past 10 years, the silver industry has been in a 500-million-ounce physical deficit. Annual silver consumption is at a whopping 1 billion ounces, so with huge demand and limited supply, Wealth Research Group expects silver prices to normalize in short order.

Given these facts and figures, it should come as no surprise that Keith Neumeyer has a bullish stance on gold and silver. However, Keith’s price targets have received attention and surprised some investors: he has stated his expectation that gold could reach USD$8,000 per ounce, and that silver could reach USD$130 per ounce. (For context, note that currently spot gold trades below $1,300 and spot silver trades below $16.)

In response to Mr. Neumeyer’s price targets, Wealth Research Group views them as well thought out and quite reasonable. Naturally, we will defer to Keith’s immense stature in the precious metals community and his vast experience in the industry, but our independent research also corroborates Keith Neumeyer’s expectations as entirely realistic and accurate.

In an environment where the U.S. government is amassing a deficit in the trillions, and with the 30-year propped-up bull market in U.S. Treasuries likely to come to a terrible end in the near future, $8,000 gold and $130 silver actually make a lot of sense. And when this happens, companies like First Mining Gold and First Majestic Silver will be poised to break out to the upside in a big way.

Wealth Research Group stands behind Keith Neumeyer’s positions on gold and silver for 2018 and beyond.

Check back frequently with us as we watch for the latest news and updates from the great Mr. Keith Neumeyer.

This work is based on public filings, current events, interviews, corporate press releases and what we’ve learned as financial journalists. It may contain errors and you shouldn’t make any investment decision based solely on what you read here. It’s your money and your responsibility. The information herein is not intended to be personal legal or investment advice and may not be appropriate or applicable for all readers. If personal advice is needed, the services of a qualified legal, investment or tax professional should be sought.

Never base any decision off of our advertorials. Wealth Research Group stock profiles are intended to be stock ideas, NOT recommendations. The ideas we present are high risk and you can lose your entire investment, we are not stock pickers, market timers, investment advisers, and you should not base any investment decision off our website, emails, videos, or anything we publish.  Please do your own research before investing. It is crucial that you at least look at current SEC filings and read the latest press releases. Information contained in this profile was extracted from current documents filed with the SEC, the company web site and other publicly available sources deemed reliable. Never base any investment decision from information contained in our website or emails or any or our publications. Our report is not intended to be, nor should it be construed as an offer to buy or sell, or a solicitation of an offer to buy or sell securities, or as a recommendation to purchase anything. This publication may provide the addresses or contain hyperlinks to websites; we disclaim any responsibility for the content of any such other websites. We have been compensated by First Mining Gold, five hundred thousand options for a one year agreement. We have previously been compensated six hundred thousand options for past years agreements, none of our options have been exercised. In addition to options we are currently managing a marketing budget of two hundred and fifty thousand dollars, paid for directly by the company. We are currently in a one year agreement with First Majestic Silver, we have been compensated with twenty five thousand options, and thirty thousand dollars. For prior expired agreements we received an additional fifty thousand options, none of which have been exercised. Please use our site as a place to get ideas. Enjoy our videos and news analysis, but never make an investment decision off of anything we say.