The market couldn’t be underestimating more disproportionately how much Donald Trump is dead serious about making sure that the USA does not become enslaved by its relationship with China.

Of course, America is responsible for the economic miracle that the Chinese have undergone in the past 40 years, but the trade-off wasn’t that pleasant for middle-class America or for lower-income demographics. The business policies of American businesses have had a negative impact on America as a nation.

In exchange for UNBELIEVABLE access to its endless pool of cheap-labor workers to U.S.-based manufacturers, the American consumer enjoyed lower prices – that’s the simplified version of events. The high-paying industrialized jobs moved to China, allowing corporations to increase margins, even while lowering prices, but tens of millions were robbed of their professional careers in North America as a result.

Everyone knew there was a problem with this improper arrangement, but since the elites enjoyed the advantages of open borders, politicians did nothing to address this matter.

Now the gloves have totally come off with this administration. Trump is forcing America to undergo a painful process, which is similar to what businesses call High Switching Costs.

Here’s an example of how this works: Microsoft’s most important competitive advantage is that most people work with its operating system and software. If a competitor selling cheaper products attempts to convince a CEO to switch hundreds or thousands of computers to a new software, the CEO says NO, because while he might save costs on software, the associated switching costs of buying new computers, training all of his employees to use it, losing efficiency in the meantime, and the fact that his clients and vendors still operate on Microsoft’s software makes it too difficult for him to switch. This is a great advantage in business, but between countries it’s a stranglehold.

China has become TOO POWERFUL to hold such leverage over the U.S., so the time has come to unshackle that dependency. Government, by the force of law, can enact changes (force them really), something that the free markets can’t really do.

So on Sunday, both the U.S. and China raised tariffs on additional products and there’s another round – a final one – coming in December.

The big change in this new round is that many of the products that just got taxed are consumer-related.

Consumers understand that if they wish to purchase anything, today’s price may be cheaper than a few weeks or months down the road, which is a highly inflationary mentality for consumerism.

Secondly, the costs of relocating supply chains out of China and into other regions are expensive and lengthy for thousands of businesses that rely on the current status.

This is not something that’s going to just disappear, like the markets are pricing in (a quick solution). Last week, Trump lied (most likely) about receiving calls from Chinese officials, asking to get back to the negotiations table, but the markets rallied in response. This is how much investors want to be convinced that order is about to be restored.

Once investors comprehend that this isn’t an easy deal to close, equities will be priced much differently. The results of these tariffs are inflationary; there’s no way to offset them, so corporations MUST transfer some of them to consumers. Take a look: 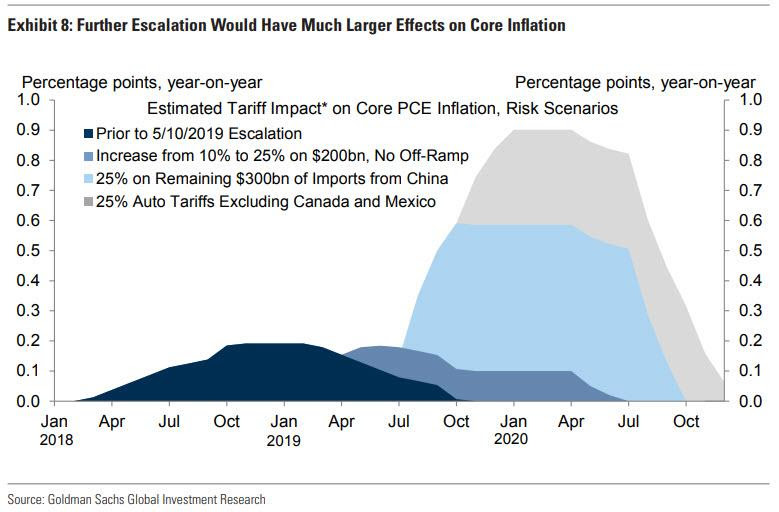 There’s a point where you have to draw a line in the sand and pay the price for the friction you create, a friction that births a new era. Wars are consciously fought with the notion that both sides will have to sacrifice something, but that this is necessary in order to usher in a more balanced future.

This past weekend, I was hiking in the Italian Dolomites. 101 years ago, WW1 was raging on in these valleys and mountains. The Italians were battling the Austrians and to gain the upper hand they came up with a way to short-cut routes in the mountains by developing a whole network of anchored cables, climbing these dramatic rock formations. It is called Via Ferrata.

Along with a longtime friend of mine and a certified guide, we climbed one of the most demanding and challenging of these terrains in sunny conditions. 101 years ago, soldiers climbed these in the snow, rain, and cold in order to protect their country and occupy it.

Many died doing this; paying the ultimate price for a cause they believed in or were forced to fight for. Don’t look for divine justice or fairness in this story – there isn’t any. China and the U.S. are scrambling for domination and supremacy in the 21st century; only one will win. The battle will have its fair share of unjust victims.

In my case, I climbed the remarkable 150ft rocks using special equipment, coached by a private guide that has undergone five years of training. Climbing is a profession, as is investing. Even though Via Ferrata climbing offers tremendous satisfaction, any mistake could be fatal, so I don’t do it alone, especially when leap-frogging straight to the most difficult level. The same holds true with investing; you MUST either start small, taking baby steps, or leverage experts using their knowledge and proven experience.

Another conclusion is that the guide wore the exact same protective equipment as we did. It doesn’t matter who you are, when you’re risking a lot, you HEDGE. Gold is the ultimate form of hedging in times of war and uncertainty.

Silver is even BETTER when this uncertainty can result in inflation.

On the 2nd day, my friend and I met the same guide, who then showed us vertical rock climbing with a rope, an altogether separate skillset from Via Ferrata. Once he saw that we reached the 60ft peak on the first go, he had us put our hands inside of shoes and asked us to climb again, so that our hands couldn’t grab anything – this made them virtually obsolete.

It forced us to focus on the technique, since using hands does not work well in harder climbs. He made us better by eliminating bad habits from the equation. On my way home, reflecting on this 2-day adventure, the 3 things that jumped to my mind the most are that (1) friendships are priceless for our well-being, (2) that we MUST not be lazy about ceasing bad habits. We must chop them off immediately, as uncomfortable as it is, and that (3) we must never stop pushing our limits and living with purpose.

Bring yourself to a state of mind that doesn’t compromise on excellence and strives for perfection at all times. Our biggest war is with our bad habits, when it comes down to it. Win that war and all else will fall into place.