Wall Street machines are, in essence, questioning their entire outlook of the world.

Imagine waking up one day, after 20 years of marriage, after building a career, after raising children and after buying a home in a certain area and making friends and setting roots, thinking that you’re not happy, thrilled or satisfied.

Imagine thinking that your husband/wife are not that good of a match, that your career is not giving you the financial rewards you deserve, that your children are drifting astray, that your friends are fakes and that the area is in decline… how’d you feel?

No one wants to wake up and question everything, to doubt their entire path for the past decade or more, has taken them to no man’s land and that they must restart and that their blueprint was wrong.

Some would completely lose their minds.

Others will fall into depression and become indifferent or agnostic, believing the best is in the rearview mirror.

Another group would lose confidence in their analytical abilities and their power to dictate their own fate and become a ship without a rudder.

One small group would think about their situation and begin to find the good parts of it, the assets, both tangible and intangible that they’ve accumulated, show gratitude for what they do have and work their way from there.

Wall Street does not take baby steps, because the algorithms aren’t human and they rush into any strategy. The market is selling NOW and asking questions later.

It is getting to a point very similar to March 2020, where investors are selling both stocks and bonds. 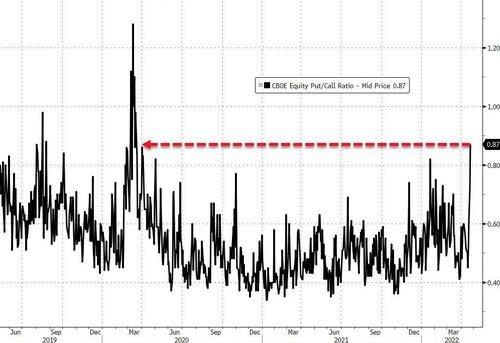 Questioning everything is a real rollercoaster ride, but it is often over-doing it.

Most major market mistakes are comprised, not of falling prey to severe sell-offs, but to concentrating too much equity (10% or more) in one stock, using leverage and of trading short-term options.

Other disastrous behaviors are insistent speculation, where the portfolio is made up of super-risky businesses.

In this market, where companies like Google report revenue growth of 26%, an unbelievable achievement, fall 5% in seconds and nearly 20% in one month, you are sucked into something bigger than you and have no control over it.

Keep in mind that all that’s happening is that buyers are asking you, whether or not you want to sell them your shares and as long as you don’t want to, then DON’T.

If you have big piles of cash right now, you’re KING.

Cash, for this brief moment in time, is KING, SUPERMAN and BATMAN… it is the ultimate asset.

The world is getting cheap and attractive, finally…

Don’t be depressed, get excited.

Apple and Amazon reporting tomorrow after the bell…