About 12 years ago, in 2006, a new mania began where I was living. The Iraqi Dinar reached such a preposterously low conversion versus the USD that there were ads everywhere enticing people to convert their currency to IQD – there were actual lines full of people waiting to buy Dinars.

The logic behind the trade was simple – how low can the Dinar possibly go? But the flip side to this is that currencies have the tendency not only stay cheap for decades, but to actually zero-out, as Venezuelans are currently learning on their own skin.

On a much grander scale, the U.S. Federal Government has been practicing this same game for decades – they’ve been advertising to foreign governments and to their own citizens that they plan to auction new Treasury Bonds, which will yield an interest on the coupon, and governments keep buying them, though the U.S. government is deeply indebted.

In terms of financial lunacy, our times will be taught in business school in the centuries to come. Students will learn about the system in which governments had the license to issue currency units without backing them with a value item at all.

They will further learn that this system enriched the insiders, while enslaving stagnant wages to the majority of the world’s population. I wonder if they will ask themselves why the common man didn’t rebel with pitchforks as they did in the middle ages.

The truth is that rebellions do very little to change the circumstances of this world – there’s a way to become wealthier even with the lunacy we see around us. 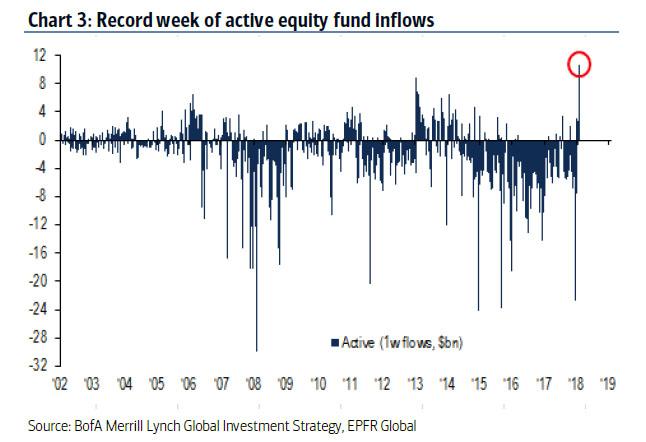 Yes, ALL stock markets around the world are now in an uptrend – it’s a global rally. I’ve personally never seen anything quite like it and neither have economic historians.

Investors just wired the highest amount of funds to equity markets in this century this past week, as the chart shows.

A correction is coming, after the S&P 500 had its best January ever, and Wealth Research Group sees the correction lasting more than a day. In other words, it won’t just be a flash-sell, but a sustained consolidation period.

Nevertheless, the market will keep heading higher afterwards. The reason is that many investors believe we’re close to the top, but the tax cuts will allow CEO’s to increase buybacks and the stock market will continue to rally.

Though Wealth Research Group sees a 40%-50% upside in the NASDAQ and S&P 500, those aren’t my favorite trading indices whatsoever.

For me, it’s not worth the risk at all. The best risk/reward ratios are with cannabis, which institutional investors can’t come near to yet; therefore the upside is enormous.

It is also in natural resources and commodities, which are beginning to outperform – the potential for a one-of-a-kind move is all but certain.

And, the mother lode is really the blockchain sector, which is now receiving the attention of every large conglomerate on the planet, and they are all rushing to file for patents!

In light of everything that’s happening, I’m publishing a detailed Special Report with how I’m positioning.

Check it out HERE!