STARING DOWN The Barrel of RECESSION!

Such a Weird Prediction
and I don’t Buy Into It

Pain makes people do many things that they wouldn’t do otherwise. Pain is not comfortable and is a catalyst for action. When a human being or an animal experiences pain, he feels compelled to take action and, more often than not, that action entails alleviating the discomfort, even if the decision actually comes back to haunt you later.

Growing up in Israel, I heard the story of Jacob and Esau, the fraternal twins of Isaac and Rebekah.

Esau, the elder brother, was a short-term thinker. When he went hunting and found no luck catching wild game, he returned with hunger pains (one of the least important kinds), so he begged Jacob to fix him a bowl of stew (one of the cheapest forms of a meal).

Serving in the IDF, as every Israeli is legally obligated to do, I know about hunger. Being out in the field for days, up all night on high alert, sometimes going for a full 48-hour span without sleep, hunger gets to you.

It’s not a pleasant feeling, but it’s manageable. You’d have to be weak to give up so much, in exchange for a meal, but some will do so.

Esau sold his birthright in exchange for a bowl of stew, and in the markets, people sell their stock portfolios when they’re cheap and attractive to others, because they can’t stand to see their accounts temporarily depressed.

They had no problem seeing them temporarily euphoric, but they don’t want to see them down. You must be able to allow yourself to look foolish today, in order to be deemed a genius later on.

Right now, all investors see is pain: Russia potentially invading the Ukraine, inflation hitting 40-year highs with no end to it, the Build Back Better plan utterly dying, supply chain shortages, labor shortages, monetary tightening and weak guidance from companies that have been deemed untouchable. 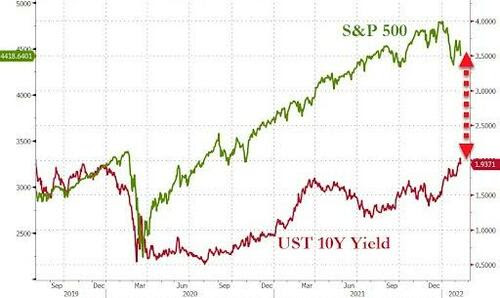 If all of this wasn’t enough, there are voices out there simultaneously saying that we should also prepare for a recession!

I hear of people who are leaving the stock market for good, transitioning to 100% cash, preferring to buy only index funds, buy PUT options to hedge, short the markets or use all sorts of strategies to limit the pain.

As you can see above, the doomsayers think that markets have way more downside, but it doesn’t make much sense.

The downside for major indices is only in the case of a real recession, and there are few signs of that happening at the moment.
Instead, focus on this: 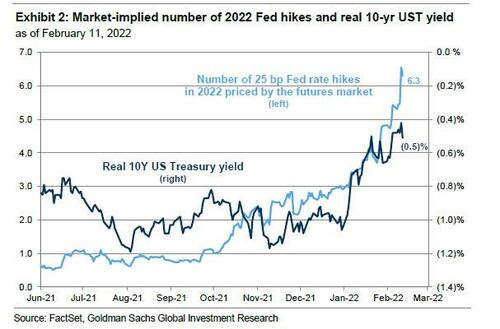 This is Goldman Sachs’ forecast of six rate hikes, which EVEN THEN, the real yields environment remains negative.

Why is this important?

The reason is that what Goldman Sachs is telling you is that even with the tightening and the aggressive reduction of the balance sheet, the FED can’t cause real yields to turn positive.

Gold is virtually a guaranteed gain and I believe $1,900/ounce is IMMINENT!