Silver is not an ordinary commodity – it is a phenomenon that needs to be researched intensely and understood in detail in order to appreciate its uniqueness.

Throughout history, three of the largest empires of Europe (Rome, Greece, and more recently, the Ottomans) used silver as coinage to create booming and stable economies.

Throughout history, dating back 5,000 years, when silver mining was first developed, its intrinsic value has been appreciated in jewelry and coins.

But for the past 60 years, technology has brought to light just how special it is and how vital it is to industry. New uses are found every year, and this industrial demand is not ceasing. 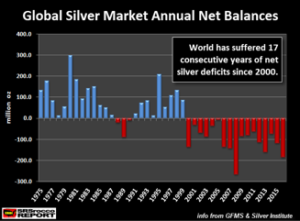 The finalized 2016 data will be published soon, but the deficit is projected to be around 186 million oz.

Here’s what is important to truly realize, and one reason that I have personally made sure that I feel comfortable with the size of my physical silver allocation: there could be a supply shortage in silver, not because there isn’t above-ground inventory, but because in times of crisis, silver regains its monetary role, and strong hands will not be selling. 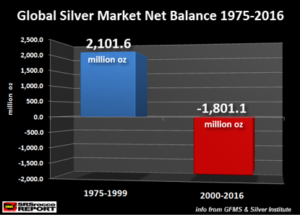 Between 1975-1999, when the fiat monetary system was relatively new, silver coins were dumped on the market by governments, but by 2000, this supply was no longer relevant. As you can see, we are reaching a point where global deficits will cancel out any surpluses from the past 30 years.

At that point, and with the paper manipulation finally exposed, silver can begin to find its true 2017 price in U.S. dollars and other national currencies. 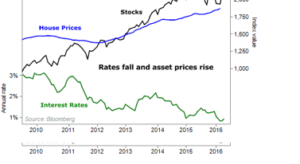 Interest rates being at artificially low levels have caused the price of stock indices and real estate to climb, but raising rates always acts like a weight on stocks and real estate, as borrowing costs rise on mortgages and stocks aren’t as attractive when yields can be found elsewhere. 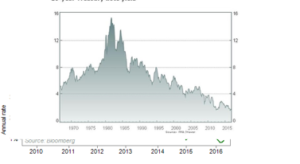 Silver is far more undervalued than any commodity out there – it is the only mineral that has not made nominal price highs in over 37 years. 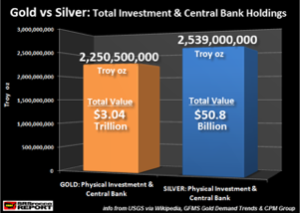 Though above-ground is about the same, look at the massive difference in total value and realize that in a global reset or in major sovereign default periods, where markets can become dysfunctional for weeks or months, most of the world’s population will flock to silver because they can’t afford gold ounces.

Indians, Chinese, Middle Easterners, and Euro-Asians, which make up the majority of our planet, are not westernized and their savings rates are in the 100s and 1,000s of dollars, at best. 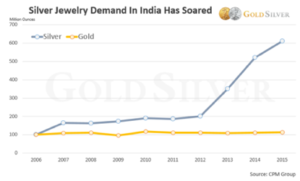 You can clearly see how this comes into play in a country like India, where gold and silver are part of the culture but people are forced into silver due to price differences. 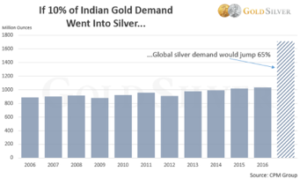 The sheer purchasing power of close to a billion Indians is a force to be reckoned with, and that’s why the price of silver could finally be headed towards its previous nominal high of $50 per ounce.

On a technical perspective, I love what I am seeing, as January has begun strong and a bottom looks to have been carved. 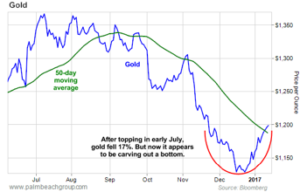 2017 could prove to be massive for silver investors, and after a long period where Metalionaires have been patient, a price discovery is imminent.

Countries around the world are liquidating foreign dollar reserves, which is a genuinely bad signal. 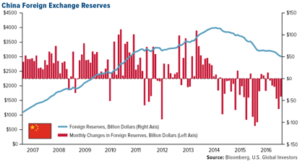 China is just one of many countries that are attempting to create liquidity for their banking systems, and in 2017, these dollars will make their way back into the U.S. banking system, creating inflationary pressure just as stocks begin to look unattractive and bonds are looking bad. 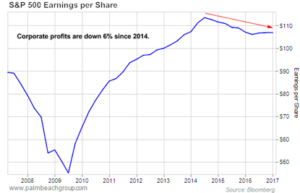 We are already in a profit recession, and what comes next could be a full recession, as interest rates rise and global trade falls.

This is the perfect set-up for silver, and Wealth Research Group will be at the forefront of analyzing the silver market, as silver prices outperforming gold prices has been the most reliable indicator of precious metal stocks rallying. 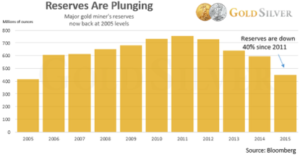 Mining is becoming more difficult than ever, and good news drives these stocks higher – your mission is to be positioned with companies that are in the immediate catalyst phase of their cycle. 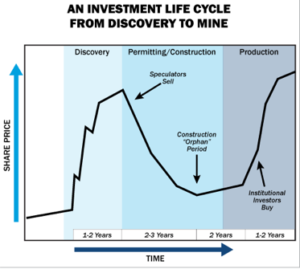 Discovery or production are the ideal timeframes.

With so much activity in the precious metals sector and with Donald Trump’s inauguration, I conducted an interview with precious metals guru Mr. James Turk, founder of GoldMoney.com, and in it are many important lessons that Mr. Turk points out, but also many key insights as to how to view precious metals going forward.