Yesterday, the Federal Reserve gave the green light for investors to position in RISK assets, by announcing to the world that it will not be raising interest rates. Since the U.S. economy is, by far, the most liquid and includes the world’s finest businesses, I expect the market to keep charging ahead – though a correction is well overdue.

General Mills (GIS), which we covered extensively as one of the safest companies to own below $38.02 in December, is already up 29%. It’s beating the S&P 500, an achievement that hedge funds have not been able to pull off in over 15 months. GIS is above our maximum buy-up price; we are in the process of tracking down another dividend-paying behemoth that could generate huge return with low risk, as well.

In 2011, billionaire money manager David Tepper, who founded Appaloosa Management, said that while you can complain about QE programs all day long, as a fund manager, it’s not your job to fight the central banks. It is to work with reality, not complain about what is totally out of your hands.

Now, for the first time in this economic cycle, it looks like the FED is going to war against low inflation. The FED has indicated that it wants to see inflation overshoot above the 2% target and gold has responded, accordingly.

We call this mentality dovish:

Effectively, the FED’s FOMC (Federal Open Market Committee), which was held yesterday, has put to rest all the rumors and the suspension regarding the FED becoming responsible – rumors that the FED doesn’t want to ignite bubbles.

What they’re trying to create is a world that doesn’t suffer at all from market shocks. In order to accomplish this impossible feat, the FED will continue to keep interest rates low for years to come. It will not meaningfully decrease the size of its balance sheet, will leave room for buying U.S. Treasuries, and will remain both mama and papa to the elite, helping them thrive at the expense of the average guy.

Their plan is to bankroll around 25% of the annual federal deficit by purchasing $20B worth of bonds every single month, for a total of $250B a year.

The magic wand is now casting its spells out in the open; currency printing has become part of Modern Monetary Theory. There are no secrets as to what central bankers want – to slowly but surely INFLATE the national debt out of existence.

At present, I’m saving 40% of my gross income, 85% of which goes into investing. The other 15% gets siphoned off to cash and cash equivalents. Since the age of 13, I’ve engrained the addiction of saving into my brain. Nothing will ever change this habit.

It looks like it’s not a popular strategy, though: 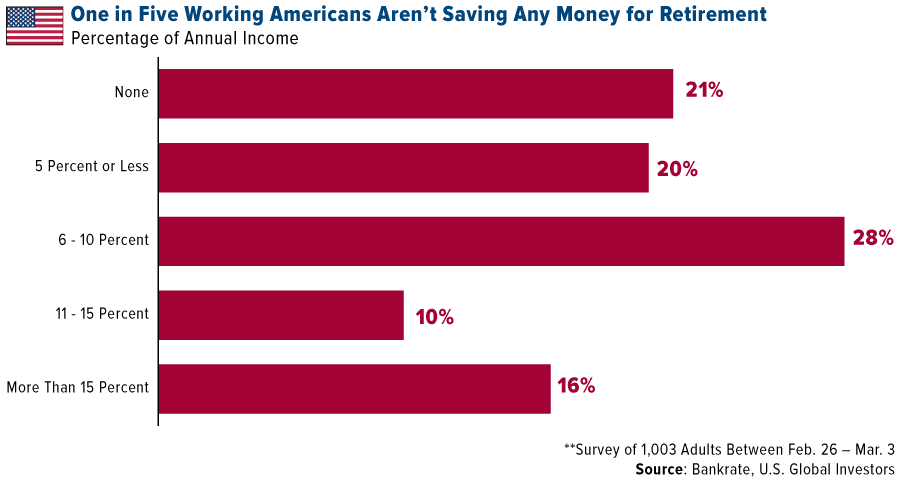 No one has ever enjoyed a wealthy lifestyle without paying himself first.

The contrarian will continue to save much more than 15%. That is a starting point. Stretch every dollar, but more importantly, stretch your mentality to open up your mind to wealth.

If you’re reading these words, you’re already doing more than the 99% of the people who don’t take any action to increase their financial education. I was lucky that my father went bankrupt three times between the time I was 13 and 23, because it germinated in me the bug of NEVER succumbing to poverty. It also made me want to experience thrills and to live life with no regrets.

Yesterday in Tampa, FL, I got to pilot a fighter jet that was manufactured in Czechoslovakia – an L-39 Albatross. We pulled aerobatic maneuverings, hit 3.5G’s and banked 60 degree turns.

It was unforgettable. Live your life according to the script you write for yourself and allow nothing to implant nagging doubts in your psyche. Life starts within and manifests itself without.