Inflation is Being Neutralized

On November 14th, 2004, one of the most credible sightings of a UAP (unidentified aerial phenomenon) occurred, and it’s since been featured and discussed on all mainstream media outlets, including 60 Minutes and the History Channel.

When I say it was credible, I mean that the Navy itself is the source and that the Pentagon has confirmed the authenticity of the event, which Raytheon Corporation’s infrared sensor has captured on film!

There is no debate here; in the skies, there are advanced technologies that are either not of human origin or are of our own doing and are so superior to what is publicly disclosed that anything you’re seeing is just a grand show being out on so that the enemy doesn’t know about the real capabilities of their aggressors.

Commander David Fravor and his wingman were taking off from the USS Nimitz south of San Diego, an area I’ve spent time in myself both whale and dolphin watching, in the air with my Cessna, and where the Top Gun flight school is based.

David is not a rookie pilot; he was part of the Black Aces squadron, a lead pilot, and a graduate of Top Gun.

What’s really unique about this sighting is that David and the second brand-new F/A-18 Super Hornet that was in the air conducting defense training were contacted by the USS Princeton with the following message: “Please suspend training, we have a ‘real-world’ tasking.”

At that point, they’re revectored and sent towards a radar sighting in which they have no idea what they’re looking at.

That’s pretty wild when you think about just that alone… you’re a senior combat pilot with fighting experience and you’re being called upon to chase an aerial object that another aircraft carrier has ordered you to locate, and it’s just off the west coast of continental U.S. soil.

When David gets to the area that the radar operators indicate the object is at, they actually see a merged plot, which means this flying object is at exactly the same location as David’s fighter jet. David has to look down at the ocean where he sees “a disturbance in the water” and a white object with no wings or rotor seemingly flying without the laws of physics dictating its movements.

Inflation was as foreign as this object when it first appeared on Powell’s radar in 2020. He thought maybe the radar was malfunctioning… perhaps a weather balloon, a beam of reflecting light, something that could be explained or dismissed as a temporary glitch.

When he realized just how wrong he was, he panicked.

Now that the panic phase is behind us, he’s dealing with the new reality, and so are we. 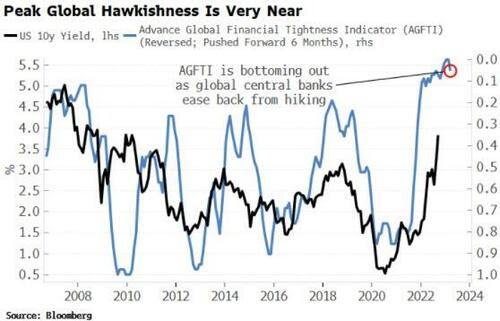 This chart shows that financial conditions today are the tightest they’ve been since 2007, and they’re peaking. We saw this with the Canadian central bank last week, and perhaps we’ll get more dovishness from the FED tomorrow, a sign that the worst is behind us.

I really hope that we’ve seen some of the worst because if we start getting mass layoffs, society is already in a very fragile place, so it will be chaotic.

What I really want you to see is that when the blue line heads down, gold GOES UP, so one heck of a rally is coming for gold!