WALL STREET SHAKEOUT: NOT FALLING FOR IT!

This past Sunday, my family and my best friend’s family, a party of four adults and four children, went to Disneyland.

The legendary theme park was celebrating its 66th birthday and it was packed. The Disney resort and park is huge and requires about 50,000 employees to operate. Before the healthcare crisis, Disney actually employed closer to 200,000, so after announcing severe layoffs and cuts, they are now able to run this massive project with far less personnel.

On a full day, the two parks, Disneyland and California Adventure, can top out around 200,000 visitors, though that has never happened. This past Sunday, our party of eight was a drop in the ocean, compared with the 130,000 people in attendance.

The average visitor would stand in lines for between 30 minutes for the rides that aren’t popular, to a full 60 minutes for those in high demand. But, the ones that everyone wants to ride take between 90 and 180 minutes to experience; what’s worse, there are a couple that are even longer.

Most paying customers stand in lines for about five hours, walk the premises for another two hours and actually spend less than a total of thirty minutes on the rides, when accounting for rests, food and restrooms stops.

Therefore, many families also sleep inside the resort hotels and actually spend 3-4 days within the Disneyland spending vortex.

Other customers willing to pay more can hire a VIP guide (which would cost $700/hour), and never stand in lines and have the entire park at their disposal.

In less than one day, they can cover all of the best rides, do their favorite ones twice and even three times if they choose. To top this off, they get to sit in a special roped area for the fireworks show.

These customers can bang out the whole experience in mere hours, never suffer through the blistering sun and the endless periods spent in dead times, and their children are constantly having a blast.

One family is dealing with the crowds and the heat, and mapping the theme park on their own, while the other simply opens its mouth and their guide makes it happen for them. Clearly, their experiences are nowhere near being equal or similar.

They literally live on two different planets. It is estimated that the VIP guide will take his customers on between 25-30 rides, six times more than the random customer.

The reason I’m telling you this is because in the markets and the economic ecosystem, there’s a great divide on whether or not inflation is transitory, on whether or not stimulus is addictive and will cause Americans to be lazy and socialistic, on whether or not the stock market is in a bubble, as well as a multitude of other things.

Just like Disneyland can entertain two entirely different types of customers – one that requires 5-star treatment and expects the best, and another one still expecting to be treated as a paying guest, but not demanding an over-the-top luxury excursion – so it is possible for all of these divides to co-exist in the financial and economic world. 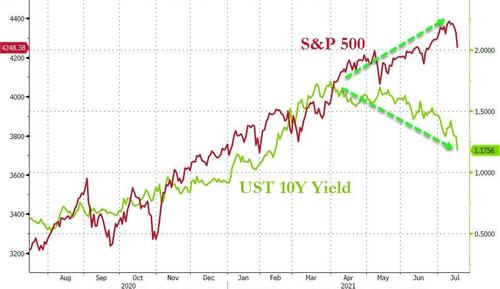 As I’ve shown you in the past two weeks, there’s clearly a great divide between bond yields and the major indices, which is the reason we could have started a pullback. If your watch list is ready, it’s time to pound, even with the pain of knowing where the bottom is.

Good companies withstand rocky roads and come out on top. Great prices don’t last forever. Duck for cover or buy the dips; the best investors do what’s hard to.