When Larry Kudlow, President Trump’s economic advisor, said that the Federal Reserve still has the ULTIMATE BAZOOKA at its disposal a week ago, many speculated as to WHAT IN THE HELL he was talking about. By the time he made that remark, the FED had already slashed rates to ZERO, buying TRILLIONS of dollars in bonds and mortgage-backed-securities, COMMITTED to loaning small businesses ADDITIONAL trillions of dollars and PROCLAIMED, on national TV, that it has an INFINITE AMOUNT of cash at its disposal. But a couple of days after Kudlow’s tease, this past Thursday, Jerome Powell UNLEASHED A H-BOMB upon the world.

There’s no going back from this.

On Thursday, the Federal Reserve began buying the bonds, graded as JUNK, and truly brought an end to the free-trading bonds markets. Risk isn’t priced in a NORMAL way any longer.

When a bank that is the world’s LENDER OF LAST RESORT has gone all-in, we’re no longer living under the same monetary and capitalistic roof we did before.

The Federal Reserve and the U.S. government have TAKEN A STAND that is of the following thought process: businesses, municipalities and individuals – indeed, the entire country, and for that matter, the entire globe – are NOT AT FAULT for getting caught off-guard by the pandemic. Therefore, there are NO BAD ACTORS and everyone should be MADE WHOLE, in Powell’s words.

Since this is hurting everyone, with no real way of pointing the finger to ERRONEOUS business practices, America’s politicians and central bankers REASON THAT the “greater good” (as they are calling it) is more important than PRESERVING the mechanics of PURE CAPITALISM.

Left alone, the market would have IMPLODED. Literally, if the FED hadn’t bailed out the sovereign bonds, the U.S. government would have been left without monies.

The world WOULD HAVE entered a spiraling depression, which would have been DESTABILIZING and may have led to wars, riots and years of DEVASTATION for all of us.

Instead, it MONETIZED debt. By simply increasing the dollar money supply, it injected all of the necessary amounts to keep markets alive, but the price to pay for this is NOT YET KNOWN and may end up being GREATER than the current predicament.

Experimental monetary policy is just that; the FED’s criminal-like actions will have LASTING IMPACT on the world for years to come, but we won’t know it until we can see it IN HINDSIGHT.

2008 QE programs and ZIRP led to excessive buyback programs, the INTENSIFICATION of the wealth gap in America, the rise of POPULISM, Brexit and many other UNFORESEEN events.

Consumers are QUICKLY realizing that shutting down the ENTIRE ECONOMY, in response to the Covid-19 pandemic, is INDEED saving lives – but for each life saved, an ESTIMATED 1,200 jobs have been LOST.

As a society, we have decided that in this particular case, the price of not MITIGATING and not DISTANCING ourselves from others would be too great. Now, we’re facing the results of these decisions.

You can’t UNDO the cards that have ALREADY BEEN DEALT. When you decide to get into the mud, you’d better have an EXIT STRATEGY.

In this case, the decisions MADE BY POWELL this past week will historically be remembered as the ones that STARTED THE RESET.

The Federal Reserve doesn’t know WHICH WAY IS NORTH anymore.

As you know, the dollar isn’t a local currency at all. In total volume size, it comes out to about 62% of the global currency supply, and HALF of those dollars are BANKED outside the United States.

What the Federal Reserve does impacts ALL NATIONS. In contrast to what many think, we already have a GLOBAL CURRENCY, which is the dollar – it’s just not a one-world-currency.

I’m certain that China, Saudi Arabia, Russia, Germany and Japan have EXPRESSED their DISCONTENT with the Fed’s entrance into the JUNK bond market. The bank’s BALANCE SHEET is outrageous and puts us all in danger. For the first time, I believe that many question Jerome Powell’s capacity to handle this scenario. 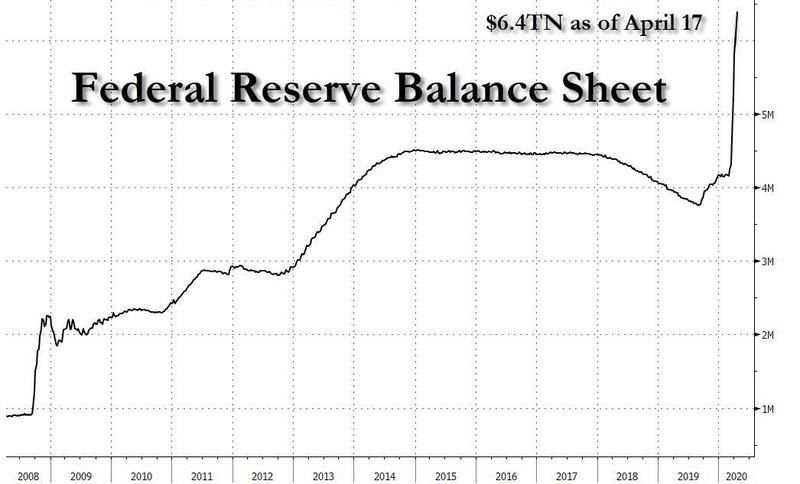 The above HOCKEY-STICK-shaped balance sheet expansion is, literally, ONLY THE BEGINNING. Their balance is going to hit $10T by the end of summer, at this pace.

I doubt, SERIOUSLY DOUBT, that in 10 years we will look back and JUSTIFY Powell’s performance as being APPROPRIATE.

The public has mostly LIQUIDATED its portfolios; we saw ENORMOUS selling volumes, so the working thesis is that the worst of the bloodbath is behind us. HOWEVER, if new UNKNOWN UNKNOWNS are introduced in the next two weeks, other investors, who don’t have the STAMINA to look at their equity crater AGAIN, will sell. So will others who are approaching retirement and no longer BUY INTO the V-shaped recovery model. This may result in TESTING THE MARCH 23RD lows again.

If that occurs, I will be buying certain companies, which have proven themselves to be DISPROPORTIONATELY mispriced in the recent sell-off.

This Tuesday, I’ll be revealing my PERSONAL SHOPPING LIST.