Don’t confuse a rally (a momentum trade) with a bull market. By all modern measures of calculations, gold is, indeed, in a bull market, but commodities, in general, are definitely not.

What I mean by that is that in a natural resources bull market, silver outperforms gold by a wide margin, but that’s the polar opposite of what’s happening today. This is part of the reason we’re not seeing significant inflows towards gold stocks or towards metals stocks. Investors are not yet convinced that inflation is making a comeback.

The Federal Reserve, and to an extent, President Trump and the Chinese, are all behaving in a manner that is putting pressure on the velocity of money, a key catalyst, historically, for creating inflationary shocks.

The most important issue I want to stress is that in this stock market mini-correction that we’re undergoing, the American people are placing the blame on Trump, not on the FED. In December 2018, the masses developed a renewed hatred of the Federal Reserve because Trump made sure the public knew that tightening was killing the stock market rally.

This time around, the public sees Trump’s unresolved negotiations with the Chinese as the main problem. Americans may dislike the Chinese, but they EXPECT Trump to solve the problem, not the Asians.

The campaign trail will commence soon and it will be Trump that is under the gun daily, answering questions about the trade war that he created, but has not put to rest. This is the reason that we are certain that he will be going to great lengths in the immediate future to put a concrete agreement in place. 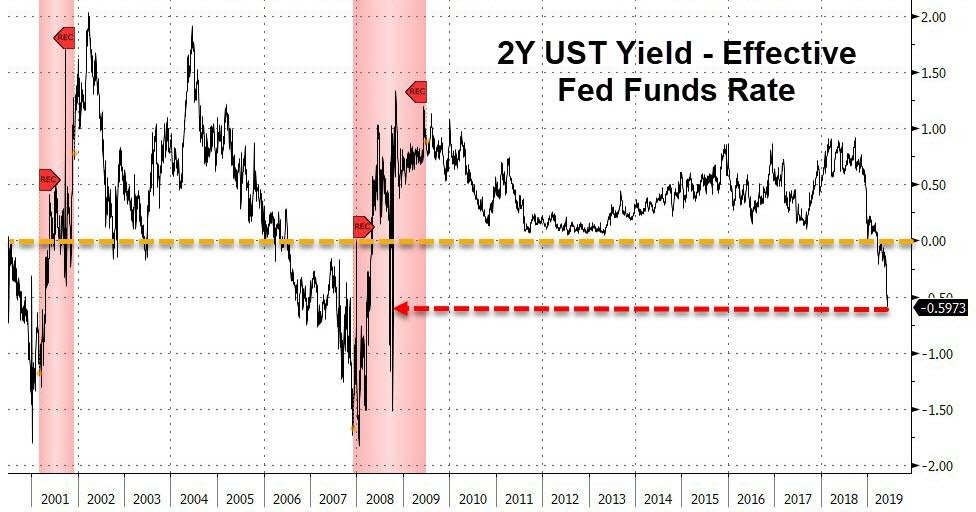 Jerome Powell couldn’t hold it in ANYMORE and confessed that the FED will have to resort to what I refer to as the New Norm; whenever the economy slows, troubles go away by slashing interest rates back to zero. This goes even beyond the realm of QE and is all done for the sake of kicking the can way down the road, scarifying more unborn American babies by indebting them before they even draw their first breath.

The above chart represents the widest yield inversion it’s been since March 2008, just to give you an idea of where we are – but contrary to that period, THERE IS NO EUPHORIA.

To me, that means we’re closer to an interim bottom for stocks than to the crash. Trump is under immense pressure to get a deal inked and if that occurs, the markets will blow out steam and possibly rally into new highs.

For now, it’s a great time to look at specific dividend-payers that have come down enough to offer margin of safety and attractive valuations, by building long-term positions that will provide retirement income in the decades to come. 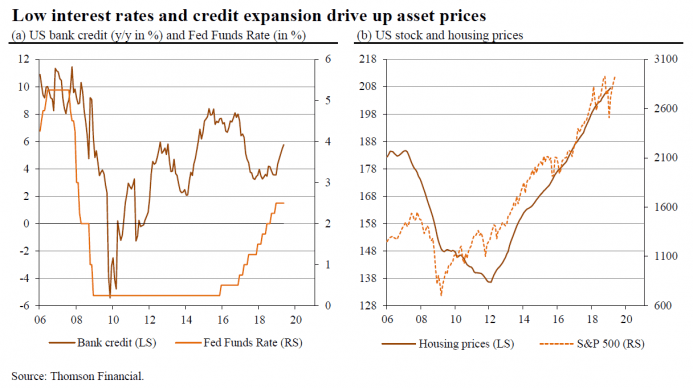 We’re living in the HAVE/HAVE NOT economy, so lowering interest rates so that the top 10% can continue on the path they’ve been following, which consists of borrowing funds and investing this in equities, bonds, and real estate will persist. As the chart clearly shows, the disconnect between the real economy (the one most belong to) and the artificial one, is HUGE.

The only question is how the rest of the 90% intend to participate in this new economy without losing their minds and growing in their frustration. The danger of grand riots is, genuinely, there.

The FED is planning rate cuts, which will put a huge question mark around the attractiveness of cash versus gold ownership, which seems more relevant than ever. The president really needs to sign a deal with the Chinese, which will (A) make commodities more expensive, (B) cause countries to pursue self-sufficiency (a clear net positive for commodities prices), and (C) cause weak demand for dollars in reserve.

This is a slam dunk for natural resources, not for globalism. Both the FED and Washington are inflating; that’s the bottom line. Like I said, a spot gold position, which represents between a minimum of 4%-10% in a well-balanced portfolio, is performing exceptionally. Be patient on gold stocks; their time will come too.