President Trump has labeled this impeachment process an attempt to undermine democracy; that’s a bold statement, one that shows he is either totally innocent or is willing to fight until the bitter end.

In reality, this ordeal is not what’s prompting this massive sell-off in stocks. What’s causing it are both the POOR, weak manufacturing numbers, as well as the Japanese central bank’s waiving the white flag, when it comes to supporting their bonds market.

As a result, rates have begun reversing sharply, but that’s not all: there are laws that Senators are legislating that are designed to limit capital flows out of the U.S. and into China, and vice-versa.

Smart Money is actually buying aggressively into this dip, banking on a Trump victory in 2020 and on a happy ending to the trade war, so you know that they’re not too panicked over this.

But, nonetheless, Trump can definitely announce the use of special emergency powers that grant him the ability to enforce asset seizures, freezing of accounts and other partial bans and restrictions on U.S. citizens and corporations that deal with China or on foreign entities that hold wealth on American soil, which will be GAME-CHANGING procedures.

Remember, the Chinese are also holding leverage over Americans – which they still haven’t used – in the form of trillions in Treasury holdings. If the communist party wants to prove to America that it can torment them as well, they can take a small piece of their large hoard and fire-sell it, to prove a point.

Smart Money bets that these concerns are short-lived, that Trump will win and that cooler heads will prevail, but it’s not without its challenges.

Take a close look at this: 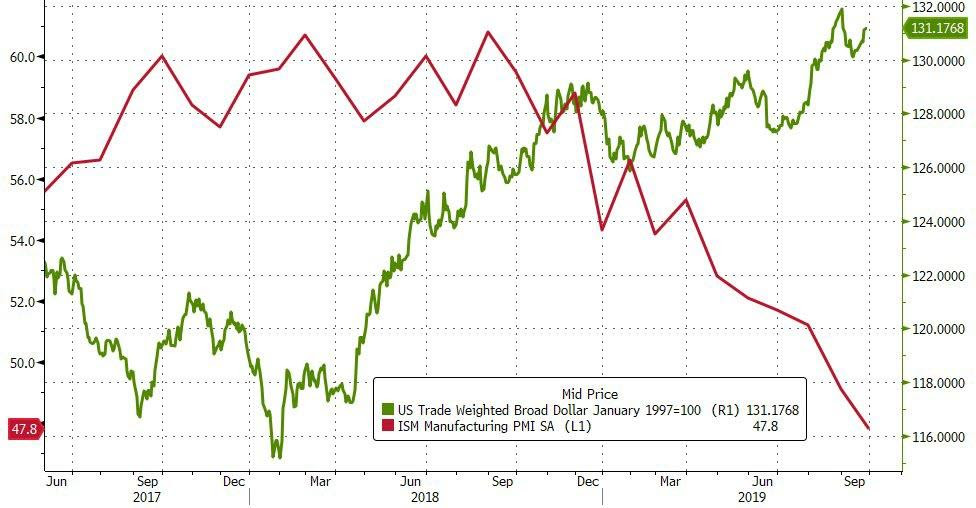 Notice that since the time gold bottomed in September 2018, the ISM Manufacturing PMI index has been contracting – now to its weakest read since 2009 – which is REALLY BAD, mostly because the dollar is so strong that exports are suffering, at the same time.

The FED, of all academic institutions, should be well aware of this; a strong currency is problematic for manufacturers that export to other markets with devalued currencies.

This is part of that squeeze that dollar investors are creating by holding on to cash, no matter what.

Trump is therefore showing his Alpha Male status on his favorite platform, Twitter:

We’re entering October, now about one year from elections and there’s no room for error.

As a result, the October meetings with the Chinese will be critical for Trump’s approval ratings, for the markets and for bond investors worldwide, who have bets on perpetually low rates.

It’s true that the dollar is at all-time highs, but it’s mere theatrics, a bubble, since EVERYBODY owns it – but no one can justify WHY, except that other people do.

Man oh man, if the fascination with this paper currency attached to the most indebted government ever withers away, the metals will have one HECK of a move.

If we’re calling this right, October’s positive trade news could be the end of this over-extended bullish dollar position; we could be just WEEKS away from a USD-based gold rally.