On Wednesday and on Thursday, we saw record up-days with the major indices. It’s not a surprise, given how oversold they were, on a short-term basis, but looking at 2019, we know that central banks want to keep tightening rates and shrinking their balance sheets.

All assets are priced according to their future cash flow projections. When central banks raise interest rates, they, in essence, make it more difficult for companies to turn a profit because they elevate borrowing costs for businesses, suffocate credit for the lending community, which makes it problematic for banks to originate loans, and, lastly, it makes cash look safer than bonds, and in turn, bonds to look safer than stocks.

Tightening cycles lead to bear markets – it’s that simple, and, as we wrote many times before, there has never been a tightening phase, without a recession, afterwards.

In a debt-infused system, credit is the basic commodity. Right now, we’re at the end of both the short-term business/debt cycle, which lasts 7-10 years (it started in 2009), depending on how low the starting point is. 2008 was a very low launch pad, hence the lengthy expansion.

But, we’re also at the end of the long-term cycle, which is normally 75 years long. Because most of us weren’t around in the 1930s, it’s difficult to comprehend this or realize it, without educating ourselves on these cause-effect relationships.

Being that we are at the end of both of these, simultaneously, you should expect that we’ll see much more intervention, both by the central banks, as they attempt to cushion future blows, and from governments, which will do EVERYTHING in their power to smooth things out.

Since investors price all assets, according to future earnings, like discussed before, it doesn’t matter that we’re currently in an environment of record profit margins, low unemployment, and plenty of business confidence, since that’s already priced in.

What everyone looks at is what price they should pay today for an asset, given how the world would look in five years’ time. 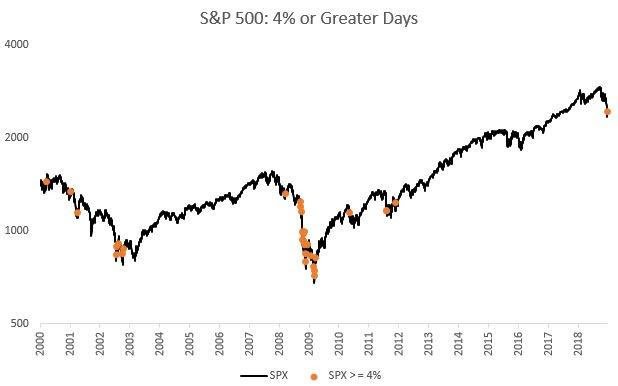 Check out the chart above. It shows that 4% moves to the upside, like we just saw, don’t necessarily mean we’re heading back into euphoria or renewing the uptrend. Big, violent up-days are mostly symptoms of bear market denials by the bulls.

In other words, they’re bounces, not indicators of market trajectory. In October 2008, we even had a 12% one-day bonce and another 11% rally a few days later.

On eight past bear markets, the S&P 500 had these huge bounces, which were bigger than 2.4% daily gains more than 115 times, while the market actually went down, forming a bottom.

Focus on the big picture. The economy is super strong, even though the FED is draining liquidity to put some barriers on it. This means they’re looking to curb inflationary pressures that are building up after a decade-long uptrend.

Since we’re exiting the monetary-policy-dominated economy (central bank driven) and entering the fiscal-policy-centered world (government driven), we know that infrastructure programs, new regulatory reform, additional tax laws, and other tools the government possesses will be put in place.

Remember that the wealthy do not create money velocity at anywhere near the same speed as the middle-class and lower-income demographic do. Because the wealthy already spend the way they want to, making more money doesn’t increase their spending habits. On the flip side, when the working class sees more money coming in, they immediately consume more. This is what has been missing in this recovery – the participation of the real America.

The rich, when presented with QE programs and credit liquidity, invest in assets, enriching themselves, gaining an unfair advantage over the average person, who has no access to this cheap and available debt.

That’s what has made America so polarized after 10 years of a “recovery,” in terms of wealth creation.
I have visited over 28 various cities, throughout the U.S. in the past six years. There is almost no middle-class left.

Next, we come to the part of the cycle we are currently in. It’s the stage, where people want change, desperately so, since they haven’t seen the benefits of the monetary policies at all. They don’t have investment income, or equity. For them, a recovery can only mean one thing – salary increases, better job openings, more affordability and entrepreneurial opportunities, all of which were not prevalent during the past 10 years.

In a globalist-led world, prices go down, since competition is open to the lowest bidder, without any regard to labor arbitrage. Globalism birthed the rise of China. Right now, the trend is to close the doors of open borders and free trade, a process, which is inflationary, by definition. If America looks to produce, domestically, what it can get for half the price elsewhere, prices rise, along with wages.

Silver is beginning to reflect this, breaching the $15.00 level.

For silver to erupt, like it tends to do at times, oil needs to reverse course and rally itself. Watch oil prices, and you’ll know exactly when to position in silver stocks.