A few years ago, I watched a TED Talk about lying. During the presentation, the speaker claimed that research had led her to the conclusion that the average person is lied to between 10 and 200 times a day and that people lie up to two times a day.

Some lies are small and will not change or alter anything, even if you were being told wrong information, but one thing that means a lot to many people is the moon landing.

Surveys say that there are billions of people who doubt the moon landings ever happened. Some surveys report literally 50/50, when asking people if they believe that NASA landed on the moon.

I’ve always found that topic truly fascinating because if NASA never landed on the moon, then this would be one of the biggest lies in history, including staging and faking the televised broadcast, which was shown to everyone around the world, as the astronauts were planting the American flag on the lunar surface.

Apollo 11 landed on the moon on July 20th 1969 and not even three years later, books began getting published, debunking the moon landing and dishing out a slew of reasons as to why the Apollo 11 landing never happened.

Before I tell you what I think about the whole matter, I want to say that the most interesting aspect of it all is that people doubt the official story, even fifty years after the fact.

What this tells me is how much doubt there is about what the government says, and this is something I think is actually on the rise.

Today, people don’t even believe what they see…with technology, it’s possible to re-create almost anything, and there are even people doubting the shape of the Earth itself.

If we can’t agree, as a species, on whether or not Apollo 11 and its successors landed on the moon, it shows you that we can’t agree on much.

In today’s global economy, one thing that people are conflicted about is the accuracy of CPI figures that the government provides.

This is critical, since the CPI is the Consumer Price Index. If the official number is 8.1%, while hundreds of millions think that their basket of items (goods and services) they spend money on is increasing at a far higher pace, it reinforces their lack of confidence in what the government does and how it operates. 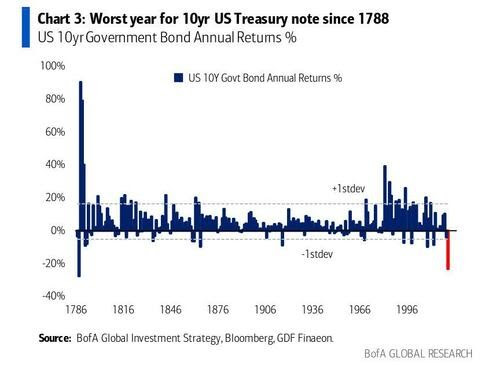 Here’s one thing that is an irrefutable fact: The last time Treasury bonds delivered a more miserable return than in 2022, the USA was twelve years old!

In August 2020, when the 10-year Treasury bond yielded 0.50% and gold traded above $2,000/ounce, we began to warn that there was no way this super-bubble in bonds could go on for much longer and that was within days of the top of the 40-year bull market!

After 2022, we think that if you really understand what’s happening, the dollar peak will be official and one of the best times to own gold in over 20 years will begin.

Moon landing or not, GOLD is the truth.