It’s hard to pinpoint when the fate of the United States of America was handed over to the gods of debt and credit, but somewhere after the 1908 banking crisis, the collective trauma allowed bankers to scheme-up the idea of the Federal Reserve Banking System.

100 years after the 1908 banking crisis, in 2008, the U.S. suffered yet another credit crunch. The collective trauma granted unprecedented powers of monetary policy to the nation’s bankers, as they not only avoided jail time, but remained firm in their high-paying Wall-Street positions, handing themselves the largest bonuses this country has ever witnessed, blaming anyone but themselves for the failure of their own system.

10 years later, these desperate banking measures are beginning to backfire on us.

As investors, we already know that 94 out of every 100 fund managers underperform the index they aim to beat, consistently. The entire money-management industry is one, giant hoax.

Throughout the 2nd half of the 20th century and in these past 18 years of the 21stcentury, one fact has remained clear – the most reliable and sure-fire way to become wealthier through stock investing is to OWN the best businesses in the world, through thick and thin.

Purchasing a stock is a decision to hold onto a portion of an operating business. What history has taught us is that fund managers listen to their whims and emotions more than they learn what actually has been proven to work.

The most sophisticated strategy for stock investing is called compounding and like all ingenious ideas, its power is in its simplicity.

Check out the following chart: 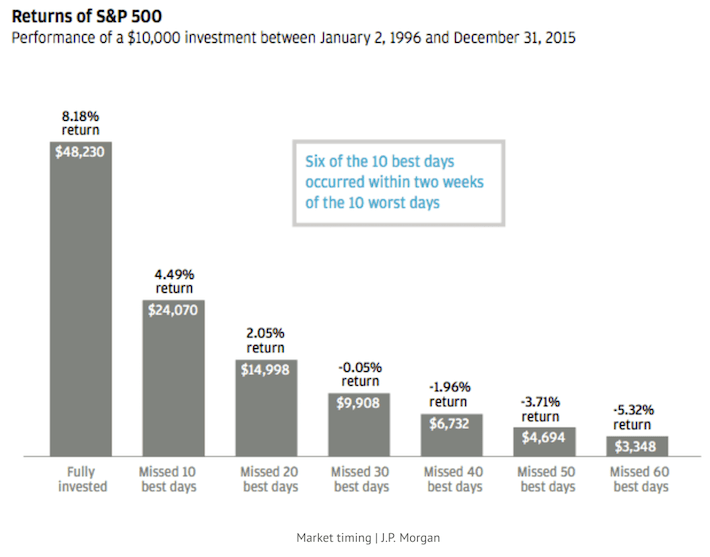 Courtesy: Cheatsheet.com
You see, timing the market is a loser’s game – no one knows, in the short-term, what stocks will do. This amazing chart shows you that over a 20-year period, which includes 7,300 days, being out of the market for just the 10 best days, would decrease your returns by nearly 50%!

Your mindset and your entire goal when it comes to investing should be to understand that STOCKS MAKE YOU WEALTHIER, but only when you follow the rules of the game.

The 2 most important rules are to own as many stocks as possible in the world’s best businesses and to keep reinvesting into them without ever stopping.

It makes perfect sense – you want to own what generates the highest returns with the most predictability.

The surest way to know when you can retire is by calculating the dividend income your portfolio can generate, the rental income your real estate holdings produce, and the cash flow income from the private businesses or secondary sources of wealth yield (private lending, royalties). Then, you can assess your passive income sources combined

Personally, I don’t plan on ever retiring fully from entrepreneurship because I love building and growing enterprises. What I’ve been passionate about since my early teens is financial independence, and the No.1 goal of the Wealth Research Group letter is to provide you with the tools to reach that level as well.

Financial independence is the economic condition, whereby you can afford all the things you need in your life to express your desires of mind, body, and soul without excess in each, solely by the constant wealth generation of passive income streams.

In other words, financial independence is being able to fund your lifestyle burn rate using only passive income streams. You are not dependent on any current work, but on your assets. Then, using your active income, you can increase your asset structure and elevate your lifestyle. 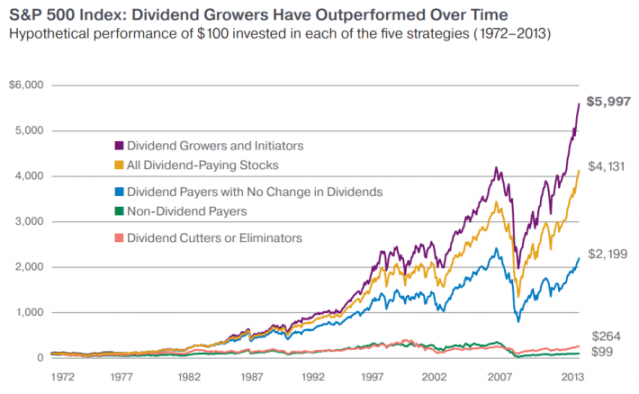 Take a look at this stunning example of how long-term investing is boring, but it works better than anything.

Between 1972 and 1980, for 8 whole years, as the chart shows, the differences among the various 5 components are relatively undetectable, but after about a decade, there’s a clear decoupling between the dividend-payers and the non-payers.

By year 20, the gap is so wide that the investors, who chose the wrong stocks, remain in the low-brackets of income, while the sophisticated investors flourish and get to enjoy the wealth accumulation miracle of the enterprise system.

By year 40, $100 has turned into $5,997 for one investor, while they turned into $99 for the other. Both of these investors were living in America and both of them had the same opportunity to join the great force, which is our capitalistic world, with its many challenges, injustices, and corruption, but one chose the wrong type of businesses to focus on. 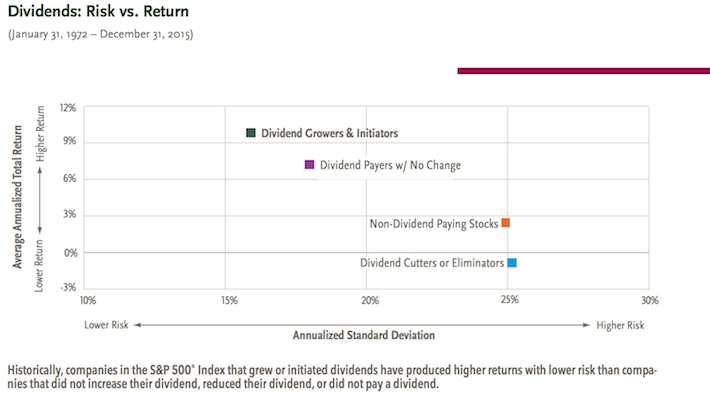 Courtesy: Rising Dividends Fund, Oppenheimer
There’s no shred of a doubt as to where most of your net worth should be at all times – it is with dividend growers, or what I call Wealth Stocks.

You should own as much of them as possible with the lowest possible entry price, collect the quarterly dividend, reinvest in more shares and repeat the process for at least 3 decades. If you do this, you will become a millionaire in 30-40 years, by starting with only $10,000-$20,000.

The only two ways to meaningfully shorten this time horizon is either by (1) allocating a considerably less amount of funds and speculating with it in hyper-growth niche industries, such as blockchain technology and cannabis legalization, or artificial intelligence and virtual reality, for example. Or, (2) you can speculate in the most notorious boom and bust industries, such as natural resources, where making 60-times your money can occur within one business cycle – a 3-7 year era, instead of 30-40 years, but the risks and the volatility involved are much more noticeable.

50% moves in the downside are common and can happen without early warning and for no apparent reason. 300% moves to the upside are just as common, though.

Therefore, the price you must pay to enter this small-cap world is to do much more homework about the people behind these companies, since these would be the keys to success, much more than anything else.

That’s where I spend most of my time – meeting with the management teams of new companies. For 98% of them, I never even spend more than 5 minutes looking at them because they have no proven track records, but for the 2% who do, I build a tight relationship with them, since they are capable of delivering massive blowout profits for us.

The U.S. government is drowning in debt right now and the American consumer is too.

Don’t allow yourself to become a slave to debt. Instead, become addicted to the idea that you’re slowly, but surely, building a fortress of the best businesses in the world, which will make you wealthy and your family independent of government handouts, forever.