GOLD FINALLY BOTTOMED: WHERE WERE YOU?

It literally takes five minutes to fact-check that gold and CPI (Consumer Price Index) or the PCE (Personal Consumption Expenditures) don’t correlate with each other. Said differently, gold and inflation aren’t two peas in a pod.

Gold tracks real interest rates, of which inflation stats are 50% of the equation, with bond yields being the second half. The way to calculate real rates is by deducting inflation from the 10-yr Treasury yield. When the subtraction comes out negative, gold’s relevance is, by far, higher than at any other time, since it becomes disadvantageous to hold cash.

In the chart below, you’ll see nearly eighteen years of the 10-Year Treasury yield, adjusted for inflation:

In other words, there is compelling reasoning behind the thesis that August’s rally to an all-time high above the elusive $2,000 was it, that it was the peak and that we’ve entered a bear market again.

On the other hand, if we compare this period to 2008 and 2009, we can see that back then, the dollar went into the crisis already weak, after it was beaten down by the Japanese Yen and the Euro in the early 2000s.

So, when comparing the two periods, the first decade of this millennia saw a weak U.S. economy, compared with other nations, whereas the coronavirus crisis happened in the midst of an American boom period.

If anything, the 2020 pandemic resembled more of the 1990’s boom, which changed with 9/11 and the Twin Towers tragedy.

Incidentally, there was a regime change from Democrats to Republicans, from peacetime to war, from free markets to more government intervention, but Greenspan’s ZIRP policy caught America unprepared.

The demographics in the 2000’s did not support a housing boom, so the artificially-low rates only served to entice the wrong people to originate a mortgage, forcing banks to take on risks they otherwise would not have, had the FED kept rates normal.

Today, it seems like the housing market is strong and has legs to run, creating velocity of money again. 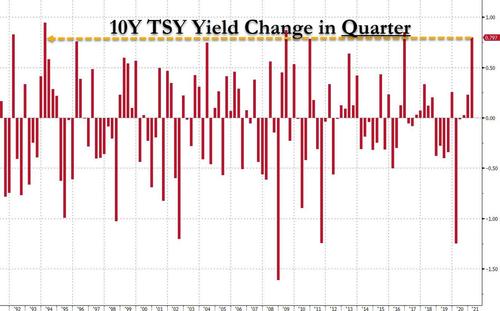 As you can see, every once in a while, the bond market begins to tell itself a story of epic inflation, due to the easy-money policies, excessive deficits and a myriad of additional factors, which it convinces itself are sure to bring an inflationary spiral.

Q1 of this year was horrible for bond prices, since yields rose ferociously.

Those who lent funds to Washington in early-January have lost 53%!

Now, it is up to you to decide, whether you are about to allow the same people who have poisoned the well, basically since 1971, to brainwash the masses into thinking the world is coming to an end for the gazillionth time, scaring their followers out of owning stocks or getting into real estate, falsely chasing returns by piling endlessly into cyclical commodities, or if you are instead going to stay leveled, putting a portion of your savings into precious metals – not instead of investing, but on top of it!

Not Biden, nor Jerome Powell, and not even your favorite guru that you believe has the pulse and beat on the markets, can change one iota from this truth: equities and real estate are wealth generators.

As long as entrepreneurship and brain power aren’t banned in this country, building, running and owning businesses and real estate in the booming areas, will always find a path to outperform any and all governmental stupidity or inefficiency.

Gold has bottomed, massive inflation is nowhere in sight and you must act.