I hate learning curves, because they can be tremendously costly, which is precisely why the best investors tend to stay away from anything they don’t understand within 30 seconds or less.

Starting at the age of 16, I began investing my own savings into publicly-traded securities. Knowing nothing about investing, I asked hundreds of questions, but quickly realized that there were hundreds of wrong answers and only one right answer to many of these questions.

My grandfather saw my frustration and bought me two books to read; they changed my life, literally.

The reason is because my dad went bankrupt when I was 13, so I’ve been working ever since and have had to figure things out on my own.

A holocaust survivor, my grandfather started out with nothing as well. At the age of 18, after the war, he began his path of entrepreneurship in the upholstery business.

The experiences he had to endure in his formative years taught him to only trust those with great expertise at what they were doing and to shut the rest out of his brainstorming advisory board. He would only accept people into his inner circle if others could vouch for them. He probably screened people 90% of the time – it’s a way of life for those, who have seen the worst in human behavior at full display, I guess. Trusting others becomes very difficult, afterwards.

There’s a great lesson to adopt here, though. The greatest investors are always skeptical and never allow others to do their thinking for them, and I learned this early on from him.

When I began investing in commodities, especially in the more volatile sectors, such as exploration and development-stage businesses, I immediately applied this lesson as well. It was always about the people and never about the assets themselves.

But, even the most talented people can’t control what the price of gold is doing or what the Federal Reserve will do next, nor can they determine when investors will shift from buying expensive tech stocks to finally start seeing the value in cheap mining shares.

There’s a price to be paid, sometimes an expensive one, for being early. The way I see it, being late pays the bigger price. I don’t mind getting to the airport 5 hours before a flight because there’s nothing to do, but wait to board, which I surely will, but I don’t want to be even a second late, on the flip side. That would hurt way more.

Just like, at the age of 16, I found Warren Buffett, Peter Lynch, and Joel Greenblatt, which led me to conceptualize my Wealth Stocks Portfolio in the highest quality dividend-raisers on the planet, I wanted to find a way to get straight to the heart of the question that I was obsessing over – what’s the least risky, most profitable, and predominantly volatile-free way to invest in precious metals?

The answer came from Pierre Lassonde, who in December of 2015 received Mining Journal’s Lifetime Achievement Award at the Mines and Money conference in London.

He is one of the only mining moguls in the world, a billionaire, and his book “The Gold Book,” is the reason I diversified 15% of my net worth into commodities in the first place.

His name comes with such an expensive price tag that the company he is most affiliated with, Franco-Nevada, is nearly 100% of the time, trading at a noticeable premium to the market, which is problematic for value investors.

Right now, it is 32% over the price I’d be willing to pay for shares, since I already own a good-sized position. 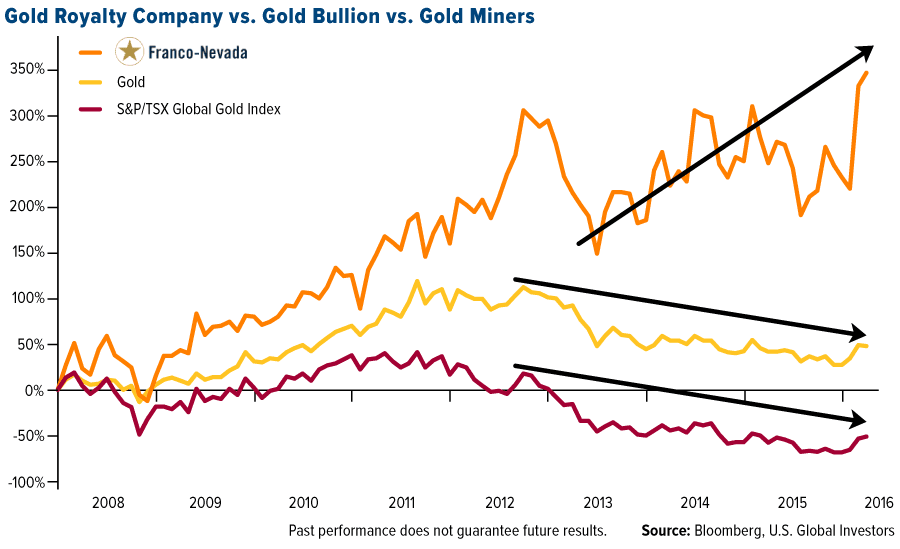 You see, royalty companies or streaming companies are vital for the mining industry. Since developing a mine is an expensive and terribly long process, due to infrastructure costs, permits applications, and labor salary, companies, such as Franco-Nevada, are essential.

It funds exploration and production projects for mining companies, which need the cash up front. In return, FNV (Franco-Nevada) and others like it, receive royalties at an agreed-upon structure.

For example, Wheaton Precious Metals has agreements in place, which grant the company to buy silver at an average price of $4.42 an ounce and gold at $391 an ounce.

Franco-Nevada, which was seeded with $2M initially, now has a market cap of over $16B – it is the world’s most successful gold royalty company.

But, what made me really fall in love with royalty companies is that they are not cyclical! 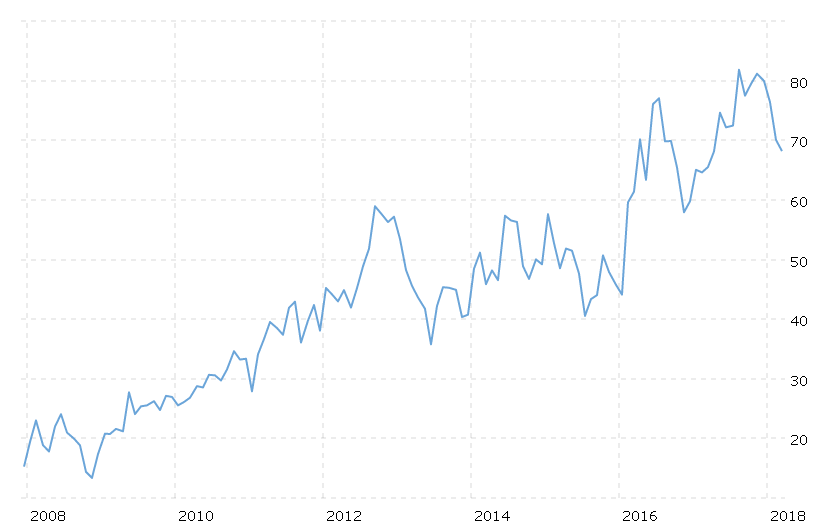 You can’t dream up a business as efficient as this, even if you wanted to. Pierre Lassonde and his founding partner, Seymour Schulich, who are both considered the pioneers of the royalty model in the precious metals sector, having imported it from the oil & gas industry, have created magic.

Rick Rule, Doug Casey, Marin Katusa and practically any wealthy mining investor will tell you this is a gut wrenching business; you must be able to overcome periods, where investors sell-off companies like there’s no tomorrow, sometimes as much as 70%-80%, and weather through it, if you want to see the big paydays in the 1,000%.

But, Lassonde circumnavigated around all that and created a Buffett-Style company. As it stands, I’m not adding to my FNV position, since my fair-market value for the shares is CAD$72, but it remains my No.1 company on the watch list. 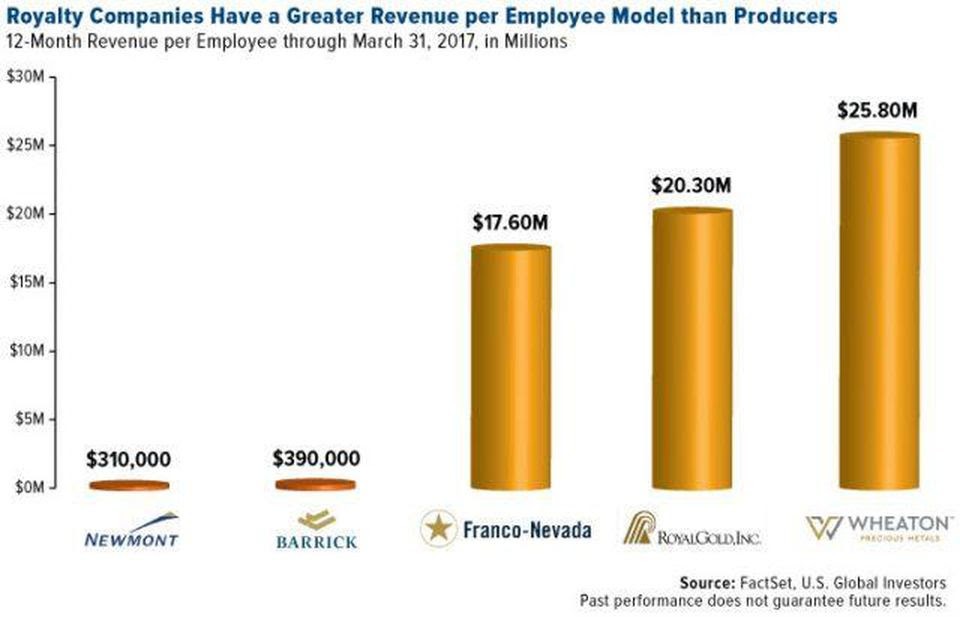 Royalty companies stay lean and incredibly thin. Franco-Nevada has had fewer than 30 employees for extended periods. Newmont, by comparison, has around 30,000 of them.

Instead, royalty companies act as financing arms. They make upfront payments to resource companies that need money to advance projects. In exchange, the royalty company gets a stake in the future production.

Because they’re not responsible for purchasing machinery and building, operating, and maintaining the mines, royalty businesses have a much lower cost per ounce of gold than miners do – that’s a brilliant strategy.

Whatever you do in the gold sector, from now on, make sure you treat this company with respect. I’ve made over 400% including dividends, since its IPO, and I’ll buy more, when the price is right. 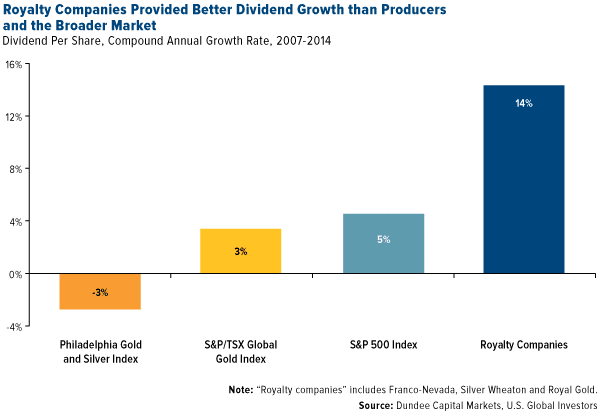 There’s only one commodity on the planet, which is just starting to get investor’s attention right now.

I was even an early investor with Altius Minerals, the premier royalty company for commodities, which aren’t gold and silver, and was able to cash in big, still holding onto 8% of my original position. This company, unfortunately, is expensive as well.

So, what I did was look for which commodity hasn’t been “royalized” yet and I found it. Since it just commenced trading, I believe we have a Franco-Nevada 1978 Moment in front of us.