Imagine that you were hibernating for 11 years – that in September 2008, you fell asleep and only awoke today. You haven’t been caught up in all the hype, the recession talk, Bitcoin, Brexit, the trade war, debt ceilings, Russian election meddling and all the ENDLESS news feeds we receive daily. They’re like little needles, piercing little dots on our backs, NON-STOP. You have slept through all of it, though.

Instead, you’re a clean slate, working only with data you gather today, instead of noise you’ve been conditioned to receive for eleven years. You look at your screen and see that in Japan, Switzerland, Denmark, Sweden, Spain, Slovakia, Portugal, the Netherlands, Malta, Luxembourg, Italy, France, Germany, Finland, Bulgaria, Belgium, Austria and other nations, governments are able to finance their debts with ZERO interest or with NEGATIVE interest for the foreseeable future (the next 10-30 years).

Then you look at the U.S., the country whose GDP is the largest by light years compared to the rest of the planet, whose economy is the most diverse, whose corporations are the BEST in the world, and you notice that they actually pay interest on their government bonds.

When given the choice between the two (U.S. debt or this crappy zero-yielding bonds), as an investor, you’d immediately lend money to Washington. That’s exactly what investors have done.

After performing that intellectual exercise, you’d look at the S&P 500, but you don’t focus on its PRICE, but on its VALUE. The 500 companies that make up the index are growing at a 5.5% rate (adjusted for inflation), paying a 1.81% dividend yield. You compare that to bonds and their returns and you realize that you MUST own stocks.

Lastly, you’d look outside of the stock market into real estate, where you see that in the SAFEST markets in the country, you can still earn 5%-6% in real terms on your money, and you realize that there’s no reason not to own that as well.

Then you dig deeper, and it finally dawns on you that 70%-80% of the population doesn’t own assets whatsoever. So this entire situation has nothing to do with them; only with the rich, who will get MUCH richer, thanks to governments and central banks.

You research the cost of living in various areas and cross it with jobs growth and wage increases, and you’d see that it’s just above the rate of inflation. The average man is SCREWED.

Now, you’re realizing that this is a house of cards; in the short-term, prices are FORCED to go up, but in the big picture, the danger of a system implosion is real and clear.

The conclusions you reach are:

Therefore, I must participate, but take profits whenever possible.

Lastly, you’d contemplate what I call the Smart Speculation Allocation, which is the 10% you devote to HUGE-RISK stocks, which can go up by hundreds and thousands of percent.

It’s the part of the portfolio we allocated into Bitcoin, Ethereum, Litecoin, Monero and Steem in 2017 and made more than 1,218% on back then.

You’d begin by studying what the president is saying: 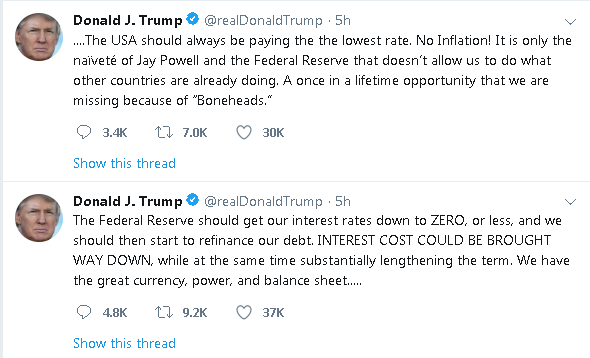 Don’t let this OPPORTUNITY slip through the net: The most powerful man ALIVE wants the dollar’s interest rate at Z-E-R-O, in order to (1) refinance the national debt, and (2) lengthen the duration of bonds to 50 or 100 years.

If there was ever a president that told you he would make your mining stock go parabolic, it is Donald J. Trump.

In 12 months from now, the wealthiest and most important nation the modern world has ever known will elect a leader. Trump will make meaningful strides with China in the meantime, and will have more aces up his sleeve to jolt his approval ratings – you know he will.

No country goes into a severe recession just because it is raising tariffs on other nations. The U.S. taxed goods coming into this country throughout its history up until the 1960s, and did JUST FINE.