TROUBLING: Many Will NOT Survive The CRISIS!

TROUBLING: Many Will NOT Survive The CRISIS!

*** IMPORTANT UPDATE: Wealth Research Group has reason to believe that short-term interest rates are headed towards a yield curve flattening and a full inversion in a matter of 12-18 months. Though it is not a reason to sell stocks today, my August Portfolio Update did include several companies, which have become overvalued and, if you own them, it’s a great time to take profits and re-allocate the proceeds. Wealth Research Group views gold stocks in the same way that a prince views the crown. He knows his day is coming, but only if the king is dead. Right now, the U.S. equities market (the king) is extremely healthy, so no one cares who the prince is, but he is still next in line for the throne. Our current top stock, Our current top stock, Harvest Gold (TSX-V: HVG & US: HVGDF), is an exploration play, which means that its stock ONLY moves on the back of strong drilling results, which is why it is a strategic investment, even with very weak gold prices. Management will be updating regularly on the advancement of the drilling program, which is comprised of 15 holes, so timing is critical. We’re positioned ahead of the potential eruption. In fact, check out today’s News update HERE! ***

During a bull market, stocks, in general, all go up in price. Business fundamentals, at times, get pushed aside, while unjustified hope and emotionally warped minds become overly bullish and downright euphoric about future earnings – investors fill their brains with grand illusions.

Think of a Lamborghini, which in this analogy is the U.S. economy. Fill up her tank with gasoline and start pressing the gas paddle. Imagine, now, that a mediocre driver sits behind the wheel. He makes mistakes at turning in high speed, so the car’s tires get burned-out, prematurely.

In our analogy, the bad driver is the Federal Reserve, the Federal Government, and financially uneducated U.S. citizens, who, collectively, have amassed ungodly debt levels for themselves and their country, and mismanaged the nation’s currency – (the burned-out tires and outdated engine parts in our analogy).

The Lamborghini is still that – a fantastic car, but it needs a better driver. The U.S. still has the greatest potential out of any country in the world, thanks to its constitution and bill of rights, as well as its unique size, its ocean access, its human potential and intangible wealth, such as patents, technology and intelligence.

Instead of taking the cue in 2008 and allowing a new regime to run its financial institutions, the same people are driving the car today. 2008 was the equivalent of a fatal car accident, yet our driver didn’t learn from his mistakes, but is gradually adjusting himself to a point of controlling the car, at least in lower speeds.

Now, though, after about 10 years on the road, it is hitting the highway, and our driver is anxious to “floor it” and show everyone what this baby can do. 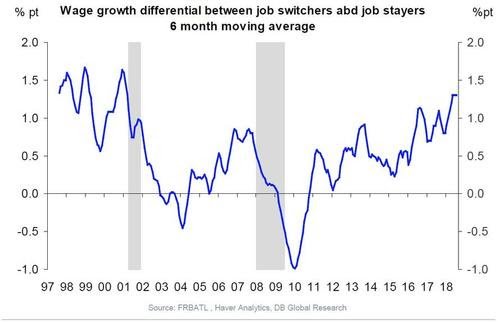 Our driver is feeling confident, just like the top 30% of Americans are these days about their future prospects, in general. The problem is that 70% are still not on the highway. In fact, they can’t find it and stuck in the mud. The U.S. is a story of two economies, unfortunately.

Look at this chart – people are quitting one job to pursue a better one; there’s optimism, and there’s a reality to back that optimism – jobs are abundant. These jobs, though, are only for people, who have college degrees and live in very specific parts of the country. We don’t have an equally distributed recovery, but a unfair one, for those, who are on the fringes of society.

In fact, there are more job openings than there are qualified workers to fill them, because most Americans are left out of the wealth cycle these days.

This is what happens when deregulation, tax cuts, and a favorable business environment all occur at the same time – the rich get rewarded more than the rest, widening the wealth gap.

Because Baby Boomers are retiring, the Millennials are finding it difficult to occupy their place fast enough, since they do not have the proper skills and training yet.

Therefore, wages are rising, since finding good employees these days, is challenging. 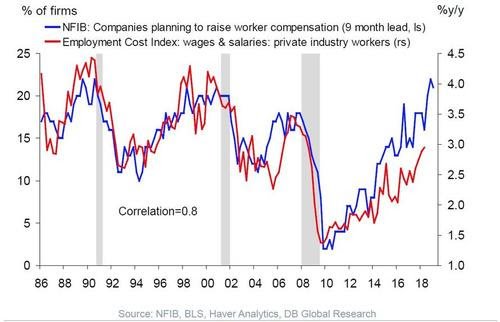 The Lamborghini is cruising in 5th gear, ready to shift to 6th, but our driver hasn’t noticed that his exotic car is running low on gas. For too long, he has been going full throttle that he forgot to check the gauges. This is likened to the Federal Reserve, which lowered rates, injected artificial currency via its QE programs and dragged all central banks to follow its madness.

If you’ve ever driven a car, where the “low fuel” indicator was on, you’d know that there are still plenty of miles the car can do.

Though gloom and doom drivers analysts predicting the car is about to pull over, it can go on for many more miles. This is analogous to gold bugs, who keep thinking the end is near, a “reset,” which will take everyone back to the caveman era, but even after the gas in the tank is out, the car continues consuming the fumes and a gas station is always nearby.

Bull markets can continue longer than you’d reasonably believe they would. This one certainly has. A “low fuel” light flashing means that the driver should consider pulling over at a gas station to refuel, but our driver doesn’t notice the warning signal.

The driver believes that by carefully squeezing the throttle, it can continue driving forever, just like the Federal Reserve believes that it can simply raise interest rates, shrink its balance sheet, and avoid getting stuck on the freeway, or calling a tow-truck to help get the car to a petrol station.

You see, when you press the gas in 6th gear for too long, the engine overheats and the car runs out of gas. It needs a breather, but this driver is no expert. Instead, he is a gambler, but he is making a bet on a car, which doesn’t belong to him. The U.S. Dollar impacts all of us, so it’s absurd that a few dozen people control its fate with such an overwhelming monopoly.

We will experience a recession. Many people will not be ready and will be caught off-guard, but those, who take precautions, will be the new Lamborghini owners, when this one runs out of gas.

This work is based on SEC filings, current events, interviews, corporate press releases and what we’ve learned as financial journalists. It may contain errors and you shouldn’t make any investment decision based solely on what you read here. It’s your money and your responsibility. Wallace Hill Partners ltd., a Canadian corporation, which is owned by the same individuals as wealthresearchgroup llc, has been compensated three hundred and sixty thousand dollars for a one year agreement. We also took place in a recent private placement and plan to be long-term shareholders. We currently own no shares outside of the private placement, which has a four month hold. Information contained in this profile was extracted from current documents filed with the SEC, the company web site and other publicly available sources deemed reliable. The information herein is not intended to be personal legal or investment advice and may not be appropriate or applicable for all readers. If personal advice is needed, the services of a qualified legal, investment or tax professional should be sought.