What has happened this past Friday is highly irregular and I can say that we are, without a shadow of a doubt, entering a New World Order, which introduces the sort of volatility that isn’t reflected in asset prices just yet.

China’s retaliation to U.S. tariffs, which immediately invoked a response from Donald, will cost the global economy trillions of dollars. The coming election year just adds more mystery and integrates further unknowns, since Trump will now be motivated not just by pure patriotic rationale (if that was the driving force, up until now), but also by his personal ambition to lead the U.S. economy for another 4 years (political calculations).

What’s 100% certain is that central banks have run their course. If, in the times of Alan Greenspan, Ben Bernanke, and Janet Yellen, the FED chairs were extremely dominant, Jerome Powell is getting his brand smashed to the ground and the media is tilting in its coverage on his sense of judgement. He is under intense scrutiny and is more criticized and doubted in the mainstream media than any of his predecessors.

Monetary policy is taking a back seat to the economic impact that a president and his administration can bring to the table. We all understand this intuitively, that reforms in taxation, providing leeway in business practices, improving regulations, being pro-active in foreign policy, trickling the right dose of government incentives, launching massive infrastructure programs, and giving states free markets in which to operate are much more inclusive than the elite-centric policies of central banks that help mostly MARKETS, but don’t do much for the REAL ECONOMY. The government can stimulate the economy in a way that doesn’t favor only the elite, as the central bank policies do.

In an ideal world, none of these would provide stimulus, but in our world, where no one is spending, the slack has to be picked up by the government.

When the two (real economy and global markets) are in such disparity that they almost function independently of each other, the tools of central banks become limited in scope and their impact could be a net-negative. There are two questions that arise: (1) Is Donald Trump the right man for the job? He has tenaciousness and a bulldozer attitude on the one hand, but the ability to reap through society with a knife and to make it divisive to a point that Americans have more loyalty to their party than to their country, on the other hand. (2) How do investors react and invest in this environment, with the big questions of an election year coming?

To me, this series of tweets says a lot about the way this country is currently being run:

Notice in the bottom one that Trump raises a valid question, which is that if the FED claims that trade issues are the main concern, how can they be making decisions without asking the president what his plans are on that matter; why is there no coordination?

To put this in context, it’s the same as buying expensive furniture for your house, not knowing that your wife just signed a lease for a new home, which makes this furniture a waste of money – you’re making calls without knowing the most important fact in this matter.

All of this is happening in August, when most trading desks around the world are operating at half of their capacity; September is going to be wild.

For the first time during this economic experiment called the global fiat system, we’re seeing a currency war that’s driving both the U.S. dollar and GOLD higher at the same time – an extremely rare occurrence that you should get used to. 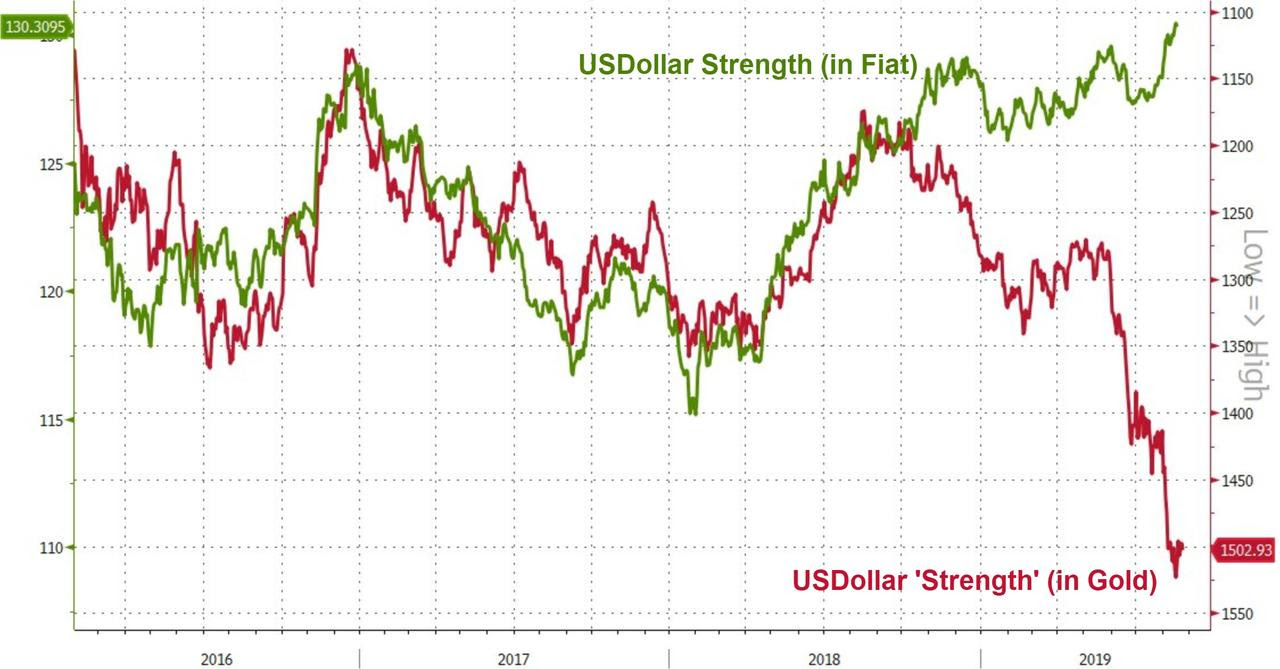 The U.S. dollar is the strongest fiat currency, but it is no match for Bitcoin or gold, which are international money platforms, whose advantages are that they’re not driven by a political agenda, but by their relative scarcity and universal acceptance.

Gold, of course, is much more accepted and doesn’t have ANY taxation or regulatory issues standing in its way, as Bitcoin does.

In this world of strong dollar/stronger gold, what could really tilt the equation even more towards gold is the relative return of equities.

If the stock market becomes too risky to justify current valuations, despite further rates cuts, then gold will SKYROCKET. Said differently, if the FED stimulates investing by lowering the cost of borrowing and stocks don’t rise like clockwork (as they’ve done in the past 10 years), then suddenly mining shares will become the GO-TO niche industry, with gold and silver taking the lead.

Trump’s days of being hailed as an economic genius are numbered. China’s move to retaliate is going against everything he’s said about the trade war being “easy to win” and that will make this September better than any Sylvester Stallone action thriller. GOLD COULD EASILY ROUND UP TO THE $1,600/ounce in this madness.