No WMDs Ever Found

To what extent is the individual person in charge of the fate of his nation? Can your personal actions make even a small dent in the national agenda and the trajectory of the country?

This is a fascinating question to ponder and discuss.

My answer is that one’s actions play a big role in the formation of the long-term culture of a nation, but in specific times and at very critical junctures, the government can influence the fate and destiny of the nation and even the world, and that’s really scary, when you think of how much power they have.

There are nearly 3 million Americans who work for the federal government, and another 19 million people who are employees of local and state governments. Considering that the total workforce in the U.S. is 158 million, nearly 12% of the American labor force works for Uncle Sam, directly and indirectly.

The Central Intelligence Agency employs a reported 21,000 people, a very small percentage of the total pool, yet these employees can shape America’s collective future to a large degree.

Rafid Ahmed Alwan al-Janabi is a name you may or may not know, but this person, perhaps more than anyone else, has shaped the 21st century for the USA, thus far.

One man, one heart, one brain and yet, so many hundreds of millions, if not BILLIONS of people, have been impacted by him—what’s even crazier is that he was a liar.

In other words, and please give considerable weight to what I just said, the trajectory of American society in the past 20 years has been influenced to a great degree by the false words uttered by this one person.

Rafid Ahmed Alwan al-Janabi, known in intelligence circles as “Curveball,” is the Iraqi source who told western spy agencies about WMDs (Weapons of Mass Destruction), which served as the pretext for the invasion of Iraq.

Despite a stack of counter-arguments to the information he provided, the willingness to believe him was a grand illusion, which duped personnel at the highest levels of government.

WELL AFTER it was known that his intelligence was false, the government kept repeating his lies instead of admitting the truth, and was led by unsubstantiated claims into a costly war.

I am telling you this, because I want you to really understand that if the Federal Reserve has made a colossal mistake, it would rather perpetuate the lie than come out with it.

That’s why despite borderline hyperinflationary price pressures in 2021, it told the world that this was temporary and transitory, even though it had NOTHING to base this on, NOTHING.

Should we never believe the FED again? NO, that’s not what I’m saying, but we should consider the source very carefully, whenever Powell says anything.

Powell and the other central bankers are in the business of shaping public opinion and every word they publicly say is calculated. 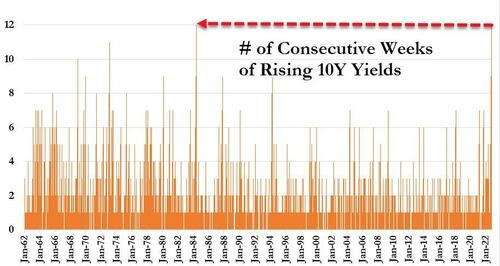 As you can see above, if bond yields continue rising next week, it will be the longest streak ever.

The FED is shaping our future and just like the failed Iraqi war, this craziness could also be costly and lead to many regrets.

They’re in way over their heads and all I can say is that we’re one shock away from a massive crisis, and I hope it doesn’t come.