Can You Stomach this Uncertainty?

A recession and a reset are two different things, but they often lead to the same result – a rebirth and recovery of the global economy.

In the classical form of an economic slowdown that the professors teach at the world’s most prestigious colleges, a recession is caused by misallocated capital, too much leverage and debt, or a mixture of unsustainable financial trends.

They result in a market crash, with mass-layoffs leading to +10% unemployment rates, bankruptcies, and risk-aversion.

The recession ends, when, here and there, some industries become more efficient and are able to start delivering value to their clients and enhance their profits.

In the past 50 years, there has been a lot of government support by way of spending, and we see slashed interest rates in an effort to stimulate lending and credit issuance.

As you can see, whatever you want to call the crisis of 2022, it is not a classical recession. Yes, we have seen two consecutive quarters of GDP contraction, but we also saw the strongest economic growth in 70 years in 2021. Both of these statistics are odd, but are present because they are benchmarked against 2020, a year of unprecedented economic freeze, due to health mandates and global shutdowns. 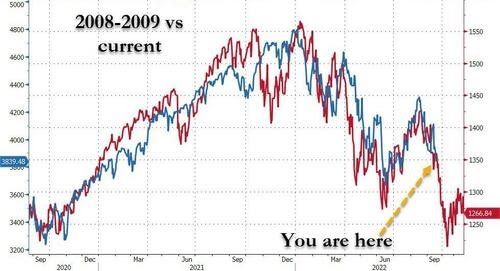 As you can see, if the markets end up mimicking the 2008-2009 bear market, as they so succinctly are right now, the S&P 500 can still fall by 15% from here, a potentially disastrous event with horrible repercussions.

A reset of interest rates and the price of credit, like the one we are now living through, is different than a classical recession in many ways, and this creates WEIRD TEMPORARY ISSUES.

Sergei Krikalev is a retired cosmonaut and a prime example of the craziness of transition periods and uncertainty.

When Krikalev was on a space mission on behalf of the Soviets in 1991, the USSR (back on Planet Earth) collapsed and Sergei was watching it all from outer space, occasionally receiving radio communications from amateur radio enthusiasts, who he kept in touch with from the West and with his wife, who was actually an employee of ground control.

Krikalev watched as the USSR broke off into 15 independent countries and left him in space, well after his originally scheduled stay had ended.

While the USSR went through a reset, the agency that was in charge of Krikalev was helpless and could not send a replacement for him. The Russians washed their hands clean of him, and Kazakhstan, a former member of the USSR, where the launch pad was situated, did not make things easy on the Russian Federation.

They demanded a Kazakh astronaut join the mission, which meant that Krikalev’s replacement, a person with his skillset, would not be part of the crew coming to the Mir.

For 312 extra days, Krikalev, the last citizen of the USSR, possessing no valid passport, was orbiting Earth, watching the sun rise and set for nearly a year longer than anticipated.

Finally, the Germans funded a $24M launch to get their first guy in space and Sergei Krikalev, one of the most mentally-fit human beings, able to withstand uncertainty in space while his wife and baby daughter waited for his return, landed and enjoyed his first breath of fresh air in a long time.

It’s crazy to think that someone was literally stuck in space for nearly another year because of politics, but as I said, resets spring forth all sorts of idiotic situations.

At one point or another, these temporary conditions end. Gold is suffering from a reset and its price is plummeting, but eventually, perhaps very soon, the drama will cease and rational heads will prevail.