Always One Step Behind

I taught my girl how to ride a bike. My wife and I really wanted her to ride with us around town, so when the quarantines and shutdowns occurred and Tel Aviv, the liveliest city I know, became Zombieland, we would go down to the street and practice cycling.

My wife’s stance was that our daughter should not fall; she couldn’t bear to see her losing balance and crashing into the cement or asphalt.

I told her that there are only two types of cyclists – those who have already fallen and those who will.

Still, she couldn’t look, as I allowed our then 4-yr-old to explore the limit of what she could do, but by teaching her how to break hard and lower both feet to the floor at once, she had a fail-safe mechanism at all times.

I gave her an out; the problem was that if she didn’t practice the fail-safe, it wouldn’t be the first thing she did during a real imbalance of the bicycle.

She may have consciously wanted to follow my guidance, but subconsciously, she, like many of us, would close her eyes, tilt to one side and let the bike fall on its front rudder.

We all want to believe that we’re ready for anything and can take on the world, no matter what life throws at us, but how many of us have a detailed plan for crashes, recessions and financial resets?

How many of us have a pre-written strategy, all laid out and visualized, so that when certain conditions are met, we go on the attack or on the defense?

Like cyclists know that they’ll eventually suffer a fall, big or small, so we will encounter a major recession, perhaps even a depression, and are guaranteed to go through slowdowns and resets during our lives.

As the CPI report two days ago proved, it is impossible to truly make a prediction, even if your occupation is economics and you’re under the employment of Wall Street firms, so who are we to think we know that kind of data, in advance?

What is within our purview, then?

What could we do to reduce the impact that such times as these have on our financial well-being?

These terms will be the subject of our upcoming Sunday newsletter publication, devoted solely to risk management and crisis investing. 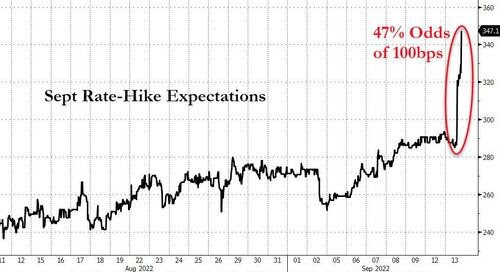 If the bond market is giving a 47% chance of a full 1.00% rate hike in one meeting a week from now, then you know we are living in the Twilight Zone.

The fact that we’re still not crashing by 40% on the NASDAQ just shows you how resilient the economy is to shocks.

Don’t panic-sell; embrace the fear and evolve as an investor. Treasure the distress and use the freeze to your advantage.