On Sunday, I explained how the petrodollar is, perhaps for the first time since 1944, in jeopardy of losing its status as a risk-free asset, an event that will have dire consequences for every American and, indeed, for every person, business and government in the world.

When OPEC was founded in 1960, the oil-producing nations began to exert more power and control over the price of the most important commodity in the world.

Since 1945, when the Saudis made a pact with the devil, so to speak, whereby they would receive the protection of the American army in exchange for oil, purchased in dollars. Whenever they stepped out of line, Washington made sure they got right back in line.

A number of times, U.S. politicians were contemplating the notion of actually taking military action and using force against the Saudis over the years, especially in the mid-1970s and the late 1990s, but cooler heads prevailed.

The creation of OPEC+ in 2016 was the first big “F*** You” to Washington, because Russia was now part of the oil cartel. The organization subsequently announced production reduction of 2M barrels/day in October, in yet another signal to Biden’s administration that the Saudis want to break free from U.S. influence and hedge their bets with China and the Russians.

As you can see, the price of gold is surging to nearly $1,900/ounce this morning, and while speculation over a Saudi-Sino Yuan oil purchase would be considered an act of war and total betrayal – which I’m certain Mohammed Bin Salman, the Saudi Crown Prince, is not prepared to take – the American economy is also approaching a full-blown recession, no ifs, ands or buts. 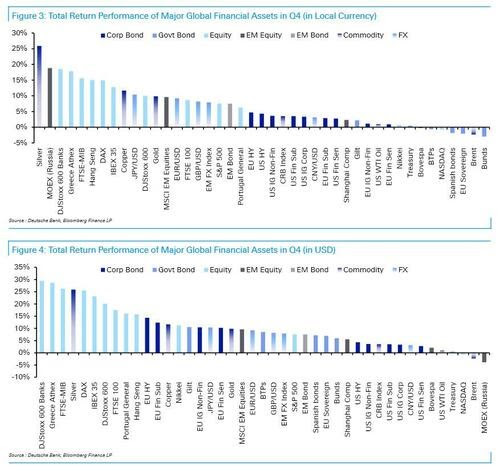 As the chart above shows, silver was the best-performing major financial asset in the 4th quarter of 2022, which goes right in line with what I’ve pounded the table on many times before: Silver is the most inversely-correlated asset to the dollar out there.

What’s happening in the world today is a rush to bonds, since yields are attractive for the first time in nearly 20 years. To the smart money, getting paid 5% to wait until the bottom in the markets hits near June (current consensus) is a steal of a deal.

When bonds bid, causing yields to peak and finally come down, the price of gold RISES, because real returns plummet.

The FED has already acknowledged that wage inflation is sticky, much more than previously assumed, and that because of the low participation level in the jobs market, wages will remain high.

You blend that together and it is a tasty cocktail for precious metals:

If you’ve ever wanted to go LONG on precious metals, the set up in 2023 is next to perfect.

The BRICS nations are also meeting later this year; if the Saudi topic is discussed, with regards to including them in the organization, that could send gold to over $2,200/ounce in one of the biggest one-day moves in history.

Gold is enjoying some of the most favorable tailwinds since the year 2000!