SCREAMING INTO THE WIND: FED Won’t Budge – Trump GETS DENIED!

SCREAMING INTO THE WIND: FED Won’t Budge – Trump GETS DENIED!

Never have I seen the managed money – the hedge funds, considered to be the smart money, those that have access to all the data, those that have the resources to research and turn every stone – so FEARFUL of a recession, without there even being one at all.

In the last three times that they were this drastic, the S&P 500 returned about 40% IN ONE YEAR, following their overly-bearish mistakes!

Time will tell if they’re wrong again, but I do want to get you inside their heads for a moment, so you can see how they’re looking at the same data as I am, with the difference being that I just bought more stocks this past week, while they’re buying bonds at zero rates.

I’ll also be issuing a report on the two long-term positions I’ve taken with incredibly profitable Dividend Aristocrats that are fresh holdings I’ve never owned before.

In 2009, I was 25 and busting my ass, working roughly 70 hours weekly, 45 of which was in my main venture at the time, and an additional 25 hours building another business. For the next 5 years, until 2014, I literally didn’t catch my breath. It was a manic pursuit, going from young entrepreneur, capitalizing on the post-recession bargains that existed to a 30-year old married man that saw his new wife awake about 3 hours a week. It was bad.

Then, I experienced my Blowout Year in 2015, which changed everything. I talk about this miraculous concept in a book I’ll be publishing in a few months’ time.

My standard of living was upgraded in a way that made me so grateful that I nearly panicked that it couldn’t stay this good. I feared that there was no way the great times would last, though there was no visible or logical reason to assume otherwise.

Money managers are sort of going through the same train of thought. They’re thinking about Brexit, Hong Kong, negative interest rates, a recession in Germany, the trade war and the Saudi oil crisis – which is STILL not resolved as to who’s even behind it, and they’re ASSUMING the economy is hitting the brakes, all because it’s been going up for 10 years in a row. 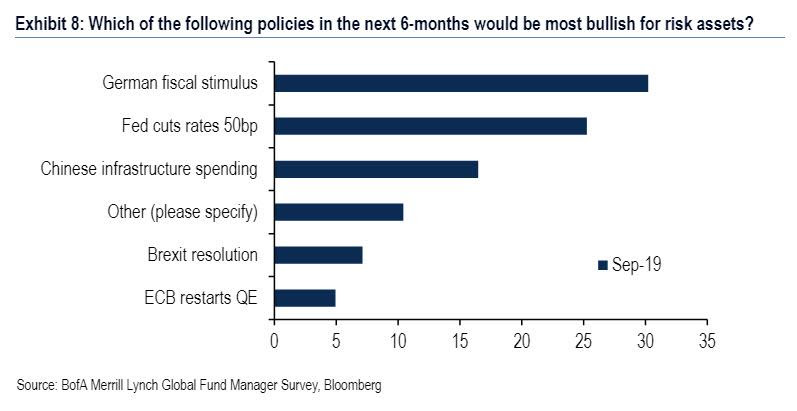 Each of the above reasons to be currently bearish is solvable. Each is a catalyst or a threat, depending on us, HUMAN BEINGS, who have been able to tackle much greater challenges in the past.

The truth is that the economy is doing so well, that hundreds of millions of people in the western world and in the emerging markets can’t even keep up with all of the innovation and positive disruption.

In other words, the problems are HUGE, but they stem from positive developments.

The bottom line, though, is that sentiment couldn’t be worse and all central banks are EASING, therefore.
We’ve been presented with a rare opportunity to capitalize on a major error in judgement.

Many, including some very smart people that I’ve run this by (multimillionaires in their 30s), make the wrong assumption that if I’m bullish on the stock market that I can’t possibly be excited about precious metals at the same time.

The correlation between precious metals and mining stocks with the general economy is not clear. The only real catalyst that has ever been observed relates to real interest rates.

The basic way to figure what real rates are is by deducting inflation from nominal interest rates. Right now, they’re negative, especially if the FED keeps slashing rates further.

This is what’s driving gold and silver higher into all-time highs in over 70 national paper currencies, and it will in the dollar as well.

We have low official inflation, which is very good for business at the same time, so there’s no reason why mining stocks, precious metals, and the traditional indices can’t all rally together.

This is precisely what they’ll do. In 2019, this strategy, our outlook, has generated ENORMOUS returns. Going LONG on stocks and on precious metals (at the same time) has been an ideal way to increase returns, while LOWERING risk. That is how we generate Alpha, and in the coming months, the strategy will work even better.

There is no way out of the national debt predicament in this country and in most other countries. Those debts will never get repaid, but unwinding them does not pose a threat that is measured in days or weeks. Take a breath and keep making a fortune.

Oh, and watch these f***ers get nailed for rigging: