Behind Closed Doors, Central Banks Are Ready for Massive Inflation

Behind Closed Doors, Central Banks Are Ready for Massive Inflation

Behind Closed Doors, Central Banks Are Ready for Massive Inflation
Accumulation Accelerator: Profitability and Strength in a Bear Market

The S&P 500 is trading at century-high valuations. Many top investors — who have been consistently making a fortune for their clients and themselves for decades — are not impressed with today’s stock market, to say the least.

Businesses are not making obscene profits like the market is giving them credit for – they rarely do at these high ratios. There are only 10 companies on the planet that deserve such high regard, but certainly not 500 of them.

There are a number of reasons for these super-expensive indices:

1. Zero Interest Rates: Most pension funds, insurance companies, sovereign wealth funds, and even hedge funds place more money in bonds than they do in stocks. This has not been the case in the past few years, with the ridiculous yields offered by bonds. 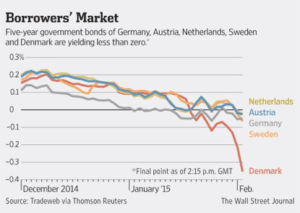 This means that these funds, which hold the majority of managed money in the world, are now allocated in stocks, rather than bonds. An excessive amount of buyers creates demand, which raises up the price of shares.

Consider, for example, shares of Becton, Dickinson (NYSE: BDX). This company is truly one of the best on the planet, and an investment in it at reasonable prices is probably one of the wisest choices one can make.

But you would have to wait for P/E ratio to drop by 35%-50% for it to make sense. It hasn’t traded at normal valuations for almost 3 years, and there are many like it.

2. “Cheap Money”: One way to increase shareholder value is to use proceeds from operations and buy back shares when they trade for fair prices, but what CEOs are doing today is borrowing funds and buying back shares at a record pace, in the worst possible timing. 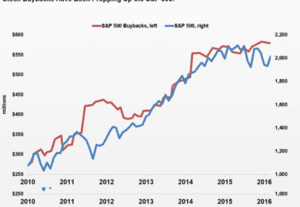 There’s a direct correlation between companies using borrowed funds to buy back their own stock and rising share prices. This is extremely dangerous, and unsustainable, to say the least.

3. Money Printing: Central banks have printed trillions of dollars of new currency and have given it to the banking system. It has not been circulating to small businesses, and therefore, the banks have been using it to invest in the stock market. 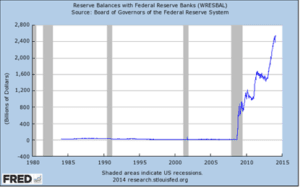 This is something many people aren’t talking about, but the banking system is flooded with cheap cash. Their business model is obviously to lend out the majority of those reserves, but they aren’t doing that right now. When they do begin, the resulting inflation can be risky.

Not only are commercial banks buying shares, but now, the new norm is for central banks to do so as well. 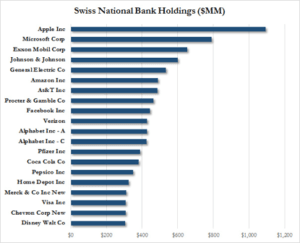 If you are wondering why Apple is trading near its all-time high, the answer is the SNB is as big a buyer as Warren Buffett’s Berkshire Hathaway.

The Bank of Japan is even a larger buyer of the Nikkei 225 and Japanese ETFs. 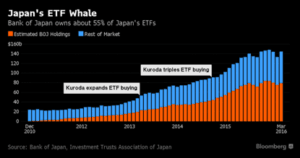 I think the reason for central planners’ intervention in the broad market is because they feel that the stock market is the best measure of success for their policies. That’s why Wealth Research Group has suggested only two Wealth Stock picks this year.

What we have focused on first of all is protection and preservation of capital. Secondly, educating our members on how this central banking manipulation affects the portfolio every day. And we even showed members my personal game plan for 2016 – no holds barred.

The purpose of these publications is to strengthen your Financial Fortress every day. That’s why we interview the best people in finance every week.

Most of all, the explosive gains that are coming because of this excess liquidity by central bankers will affect the mining industry.

As Metalionaires, we know that the dollar days are numbered, and that two types of mining stocks will be the clear winners: 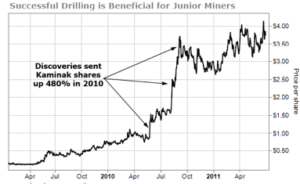 This is a time in which people should learn to stick together and help each other, since governments and elite special interest groups are rigging the books, cheating the average guy, and looting the system for everything it has.

If you are young, then realize it will be up to you to advance in the business world and create your own way – governments are bankrupt. The rising power in the world is Asia, and it would be wise for you to see how you can profit from this power shift. If you are in your peak earning years, my suggestion is that you should make sure you are applying the 5 principles of investment success, so that no catastrophic loss can set you back years at once.

If you are now a retiree or are approaching retirement, then know that at Wealth Research Group, we are devoting October, November, and December to the challenge of retirees to put their savings to work, and more than that – we are creating specialized content on the best places to retire at and how to build home-based sources of income.

By creating a rich plethora of options for people, they have a chance to make wise and educated decisions. Knowledge is potential power. Taking action is the ultimate use of that power.

We see a bear market in the broad market coming, and in the month of November, we will dedicate much time to preparing you on how to accelerate the path to asset riches during bear markets, when most investors lose their discipline and patience.