More and more, the mainstream NARRATIVE that is growing ever popular is that the origins of the virus have NOTHING TO DO with the wet market in Wuhan, and have EVERYTHING to do with the biological lab adjacent to that location.

Social media is DE-MONETIZING bloggers who are posting videos on this topic, but the cat is definitely out of the bag, now that a GENERAL has told reporters in a formal White House Q&A session that they were AND ARE looking into this subject.

President Trump has already TAKEN MEASURES by halting funding to the World Health Organization officially for dropping the ball on alerting governments early on – but UNOFFICIALLY, for allegedly helping China keep a lid on this, until IT WASN’T POSSIBLE any longer.

This can escalate quickly, and coupled with HOW PESSIMISTIC hedge funds are right now, we could get a chance to CAPITALIZE on some very rare discounts in the markets. 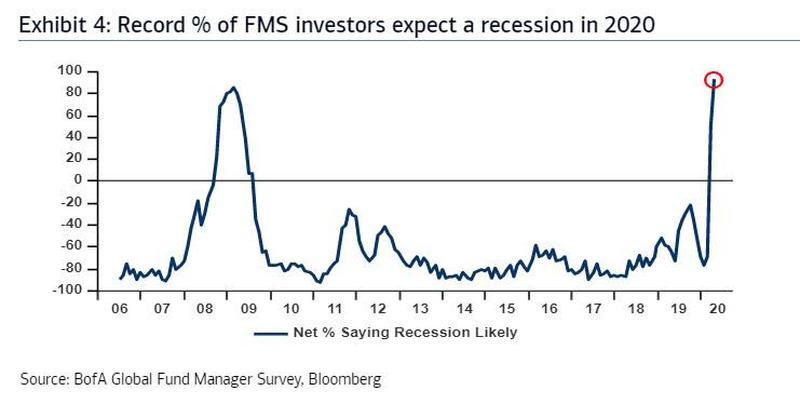 The world’s largest money managers are CASHED-UP and have more dry powder than at any point since the TWIN TOWERS fell in 2001.

They have NO FAITH in re-opening before they see it working.

In general, these LOW LEVELS of exposure to equities only happened in March 2009, right when the bottom WAS SET.

There are NO BULLS out there right now. Fund managers expect a long recovery, not a swift one.

The price of oil, WHICH DROPPED below $20, is yet another major issue for America’s energy independence and its vibrant jobs market. At this rate, NOT MANY will survive another month.

The problems keep compounding, which makes me think that Trump is about to lift the veil and begin opening the economy, using strict guidelines.

Trump is an ERRATIC CAT, with just a few months until the elections. He is unpredictable, and since his MAIN MISSION is to get re-elected, we all know he is not afraid to go OUTSIDE OF THE BOX to get what he wants, so I definitely expect him to pull MORE RABBITS out of his hat.

My research doesn’t point to any military conflict with China, but certainly to an intensification of the ones that are financial and diplomatic, in nature.

It pioneered sleep technology, when it introduced its bedspring more than 135 years ago and is a RELENTLESS Dividend Grower. Its products are all around us and it employs over 23,000 across many countries.

Americans aren’t buying furniture right now and shareholders of LEG have liquidated their position; the price has fallen by over 55%. For the first time, since the company popped on my radar in 2011, the yield is over 6%.

With SO MUCH uncertainty, I might take an initial position, sized only at a third of what I want to own eventually and wait for a further decline. All of my positions, WITHOUT EXCEPTION, are placed using a stop-loss as well.

To me, taking risks after careful study is the definition of investing. What I’m NOT WILLING to be is CARELESS. If a trade goes wrong, I put out THE FIRE by cutting the loss, not by praying things turn around!

Today, it’s a blue-chip business and it WON’T fall 50% like these industrial companies, but the March lows showed us that it has TREMENDOUS support around $36, when the dividend yield reaches 4% – A GENERATIONAL BARGAIN.

Build your own watch list. It is true that the indices have bounced back hard, but that’s NOT TRUE of all individual stocks.

What I’m doing with these shopping lists is putting companies in front of you that RARELY trade this cheap, with such a high initial YIELD. If markets continue to be SCARED, we might get our chance!