WIPE THAT SMIRK OFF YOUR FACE!

I competed in a bicycle event that was separated into age groups. As I prepared for my race, the teens were pedaling as fast as they could and this one 15-year-old was really pummeling the field, leading by miles.

As he passed by his own dad, I heard the father shout at him: “Wipe that smirk off your face!”

Since the father was only a few steps away from me, I went over and inquired as to why he told him that. He replied that he used to ride himself and lead races, and that the most dangerous part was when you thought you had the thing wrapped up in a box and lost your composure, thus either crashing or losing your pace.

“Don’t get comfortable at the lead,” he told me. Next thing he mentioned was that his son was not just racing against the other kids in that particular event, but really against the entire world. If he wanted to be world champion one day, he couldn’t get cocky, ever.

Trump sinned in similar fashion himself, back in the late 1980s, thinking he could do no wrong. Many successful people reach this self-delusional point, where they believe that they can’t get anything wrong, just because nothing has gone south thus far.

The really great ones assume no such thing. They wake up and allow facts to feed them, allow accurate thinking to guide them, and express their ideas through a flexible disposition.

To me, hedge fund billionaire David Tepper represents that type of person. He doesn’t value his own opinion, unless he believes that he has a full understanding of a certain dynamic and then he attacks.

Clearly, with rates hikes, tapering and tightening, Tepper is basically acknowledging that not until we know how bonds and stocks react to a hawkish FED, can we truly make a high-conviction trade.

Please do not confuse this with saying that one needs to be in cash; Tepper says that cash is a guaranteed loss to inflation, but he is stressing that so much appreciation has already occurred, so before one piles into stocks or bonds or real estate or commodities or cryptocurrencies, it is better to let other dynamics play themselves out.

It’s like negotiating with equities; the FED says it will raise rates while the market negotiates stock prices. The FED counters and markets make a counteroffer. The negotiation isn’t over, so why speculate, when one can wait, is Tepper’s point.

Tepper is telling us to wipe that smirk off our face if we think that just buying the NASDAQ on the dips will continue to be an easy moneymaker. 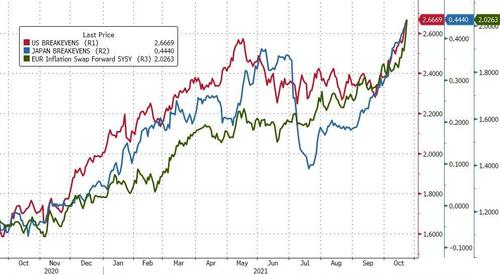 Even after everyone knows how tight the labor market is, why supply chain constraints are pushing up prices and how bottle necks are sending commodities to the moon, the market believes this isn’t the end of the story and doesn’t think the world has seen the end for inflationary pressures.

I think growth continues to be good, but the real question is whether it will outpace inflation.