A HALF-CENTURY OF DOLLAR DECIMATION!

Gold Is the REAL Money

We just passed the 50-year mark of the ill-fated “Nixon Shock.” The year 1971 was when the gold window closed, the Bretton Woods era came to an end, and the U.S. dollar was fully de-coupled from gold. I am a physical gold believer and will always hold a portion of my savings in it.

When the connection between America’s fiat currency and hard, tangible assets was severed, a new era was ushered in – one that hasn’t benefited the 99%, but only the wealthiest among us, the elite globalists, who engineered the acceleration of the already considerable wealth gap. The United States has drowned in debt, printing currency and distributing the cheap credit to the corporations, enriching the already-wealthy and off-shoring the middle-class jobs, without any regard for the well-being of the citizens.

It is the 50th anniversary of the final separation of the gold-backed monetary system.

Governments posture and boast about working towards a “sustainable” future; yet, they don’t talk about a real, sustainable economy — one that’s not reliant upon a debt-based monetary system.

No major world currency has been backed by a scarce asset like gold in the past 50 years. As a result, central banks – the ultimate globalist authoritarian entities – are given free rein to print up currency units, and they’ve been brazenly abusing this privilege in recent years: 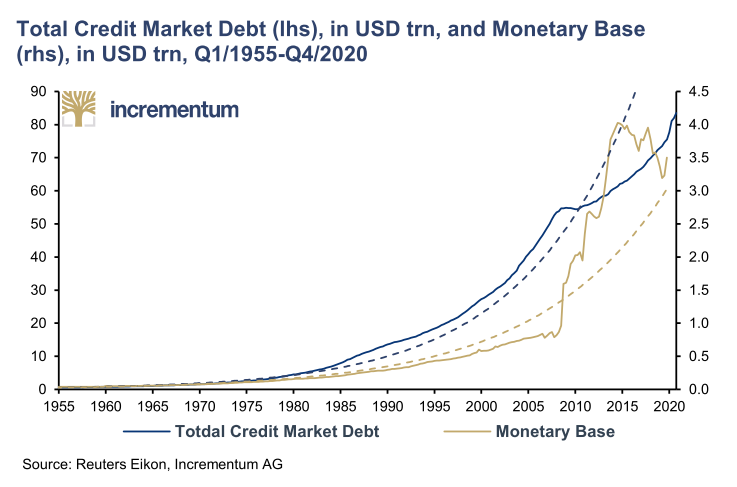 The money supply and the aggregate debt have increased at a steepening rate for the past 50 years, and especially within the past decade. In my opinion, 2008 changed everything — I’m deeply concerned about those that lack the financial education to understand this.

Crises have given central banks the perfect excuses to ramp up their currency printing programs. In 2008 and 2009, it was the financial crisis and the Great Recession; now, it’s the healthcare crisis that justifies the relentless print-and-spend policy regime.

These actions have dire consequences; nations cannot trust the U.S. dollar to maintain its value.

If the 1944 Bretton Woods Agreement established the U.S. dollar as the reserve currency of the world, then 1971 was the beginning of the end – and we’re all bearing witness to the final chapter of the story of the dollar’s domination. I’m still not sure what comes next, but the dollar standard is ancient and not relevant anymore.

It started with France, Germany, and other nations pushing to redeem their U.S. dollars for physical gold in 1968, which exposed the lie of the $35/ounce conversion. Fort Knox was quickly being depleted of its 20,000 metric tons of gold, so President Nixon “temporarily” suspended the ability to redeem the dollar for gold.

Private ownership of gold was fully legalized in 1974, thus ending the FDR-era threat of gold confiscation. Owning precious metals reassures me; I know that I’m in possession of a commodity that has high demand at all times.

We have an inflationary environment, a perpetually rising stock market, and a government that encourages spending over fiscal discipline.

You can’t spend your way to prosperity, but that’s precisely the Federal Reserve’s “solution” to the economic challenges presented. We will keep doing our thing, while they do theirs, never becoming victims, always evolving with the times.

We are not securities dealers or brokers, investment advisers or financial advisers, and you should not rely on the information herein as investment advice. We are a marketing company and are paid advertisers. If you are seeking personal investment advice, please contact a qualified and registered broker, investment adviser or financial adviser. You should not make any investment decisions based on our communications. Examples that we provide of share price increases pertaining to a particular Issuer from one referenced date to another represent an arbitrarily chosen time period and are no indication whatsoever of future stock prices for that Issuer and are of no predictive value. Our stock profiles are intended to highlight certain companies for your further investigation; they are not stock recommendations or constitute an offer or sale of the referenced securities. The securities issued by the companies we profile should be considered high risk; if you do invest despite these warnings, you may lose your entire investment. Please do your own research before investing, including reading the companies’ SEDAR and SEC filings, press releases, and risk disclosures. It is our policy that information contained in this profile was provided by the company, extracted from SEDAR and SEC filings, company websites, and other publicly available sources. We believe the sources and information are accurate and reliable but we cannot guarantee it.