What we’ve seen thus far doesn’t even register as a correction – for the moment, stocks are pulling back hard, but corrections are defined as 10% drawbacks from the highs, which means Dow Jones has a minimal risk potential of an additional 1,000 points.

Price corrections are absolutely natural – what’s not normal is not having one.

On average, every two years, for the past 70 years, there’s been at least one 13%+ sell-off, so this period, of over three and a half years without one, is highly irregular.

As I said, for this to be considered one, the major indices will have to fall a further 4%-5%, and that’s a big reason traders are holding out right now, sitting on cash, waiting to see if this correction plays out.

It’s the reason why the VIX (fear index) has more than doubled in the past few days and is now above my magic number of 25, which is ideal for options traders, at last.

The low volatility bubble, which was the most long-stretched in history, by a wide margin, is over and done with. Expect a roller-coaster market from here on, until the ultimate stock cycle top, and embrace volatility.

Like I stated throughout January, bond yields act as heavy weights on equity prices, and they’re surging higher. 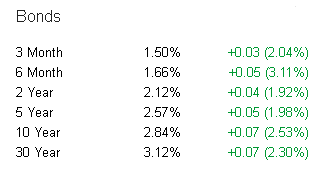 The borrowing costs for the U.S. government jump by hundreds of billions of dollars for every 1% hike – it’s ridiculously high.

But, what we’re seeing right now in stocks is not how bull markets end, so once this consolidation bottoms out, indices will rally strong again.

The big difference, though, between the coming months and what we’ve seen thus far, is that going forward, investors will increase their exposure to sectors that offer hedging to the “darlings,” the FAANG tech companies (Facebook, Apple, Amazon, Netflix, and Google), which means the generational gap formed between hard assets and tech will begin to close – energy and commodities present the best hedge for tech.

This is all happening right when the most important ratio for precious metals investors has reached an extreme – gold/silver ratio just hit 80, which is the resistance for gold for over 47 years. This means that silver is sensationally cheap at the moment, and as it begins outperforming gold, the historical data points to mining shares trading beautifully.

Wealth Research Group wants to see the ratio confirm its long-term trajectory towards the 50:1 levels by waiting until it hits 72:1, before increasing our allocation into junior miners, but we’ve reached an extreme, which is phenomenal for us. The last 3 times the ratio hovered at 80:1, we saw incredible returns in the following months.

The number of patents issued by IBM, Bank of America, Fidelity, Accenture, and MasterCard are amazing. They are all aggressively filing for them in pursuit of blockchain dominance.

Billions are going into the development of products, especially in the “Blockchain Solutions” niche.

Since this is such a new industry, the specialists, in terms of programming and software development, are highly sought-after by businesses in need of their expertise.

Providing solutions is one of the widest margin business models ever devised. Cryptocurrencies are going to fluctuate on worries and uncertainty for another 30-60 days, until some clarity about regulations unleashes them from their cage again, but blockchain itself is completely loose and on the prowl for major gains.

Blockchchain ties into all the major trends of our economy, from identity theft to the IoT (Internet of Things). Mining cryptocurrencies is only one profit center for blockchain companies – there are at least 5 additional pockets of wealth to capitalize on, and Wealth Research Group expects an epiphany from the market, once it starts to dive into some new companies that are about to go public soon.

Blockchain technology is the most serious wealth-creating machine of this decade – all investors will look to leverage their portfolio to them, but you will know about all the most important developments months ahead of the community because we’re in constant communication with the people at the heart of this industry.

My most important message to you is that between now and the market top, trading will become extremely demanding on your psyche, so make sure you’re prepared and that you’re not risking anything that will prove detrimental to your financial and mental well-being.

Great fortunes are not easily attained – they require the expenditure of immense effort, originated from the most difficult work in the world – independent thinking.