As I showed you last week, 88.7% of the 70 asset classes tracked by Deutsche Bank have netted negative total returns this year. Just to give you an idea of how rare this is, the last time it happened was right as cars and electricity were being introduced in our world and getting commercialized. It was close to 100 years ago.

Last year was also unusual, but on the flip side, because only 1% of asset classes posted negative returns. The hottest stories were about cryptocurrencies, low volatility, and the consistency of the bull market in stocks. 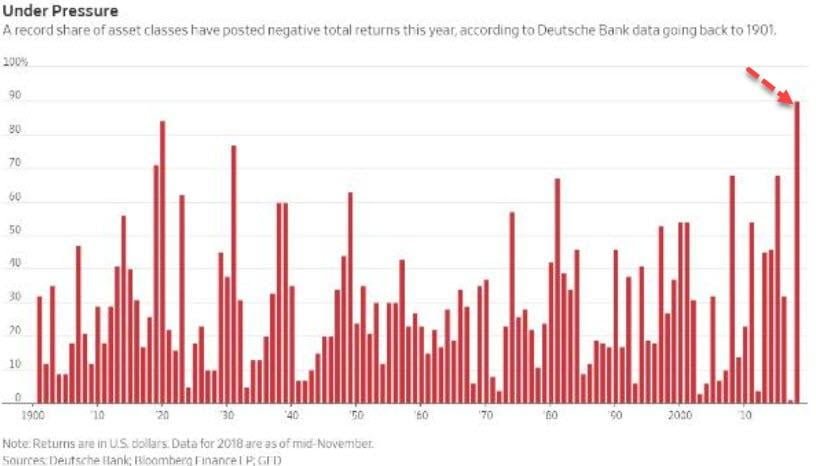 I want to focus on fundamentals, though, especially demographic ones, because we’re in a unique time capsule, since the United States, the engine of our planet, is both aging (Baby Boomers) and hitting prime salaries (Millennials), at the same time.

On the one hand, there are close to 95,912,652 Americans that aren’t part of the workforce. I’m talking about individuals, who are over the age of 16, so they could, theoretically, be productive and employed in their vocation.

Ten years ago, there were only about 78M people who did not participate in the labor force. This number will keep rising, since the Baby Boomers haven’t finished their retirement cycle yet, at the same time as modern medicine is really working wonders in allowing people to enjoy long lives, full of vitality.

Here, in New Zealand, where I’ve spent the past month, there are no native animals, save for birds. Humans have brought with them everything else.

Around 150 years ago, they imported possum. The idea was to grow it for its fur, which could be sold, but, sure enough, I’m not the only one who thinks these islands are paradise, since the possum started reproducing like bunnies, enjoying his new-found luck.

Then, because there were so many of them, it started to interrupt the food chain, with nature, and with people’s original plans. Just like governments, who make laws, such as the banning of cannabis, for example, which birth unintended consequences, like a black market, so did the people learn that actions have implications, beyond the initial train of thought.

Simplistic thinking leads to error in almost every area of life. Drawing a line from A to B, without considering everything that goes into it in our complex world, is a mistake.

Gold investors have created a linear equation in their minds, same as the people of New Zealand did with the possum, concerning the likely results of QE programs.

Ever since 2009, the mantra has been that Quantitative Easing leads to inflation, which, in turn, leads to gold prices going higher. Then, a supporting theme was concocted in the mind of one average gold investor and spread like wildfire, and it was that low-interest rates are the best catalyst for gold to exist in.

Quantitative Easing did not cause rampant inflation, or hyperinflation, as I’ve been hearing predicted since 2009, nor have low interest rates sparked a bullish trend for precious metals.

The unintended consequences were not properly considered by gold investors, thus billions of dollars have gone to money heaven, so I want to focus on the reasons that, except for the 2016, 8-month parabolic move in gold and silver stocks, the last 8 years have been one, long, grueling, and disgusting era for mining shares.

Since 2011, nearly 15 million people have exited the workforce, which has put deflationary pressures on the economy because less than that amount have entered into it.

In the real estate market, foreign investors, carrying cash, scooped up millions of properties, post-recession, in many desirable areas and turned America, along with the inclusion of hedge-fund real estate buying, which is a new phenomenon, into landlord heaven.

Inflation doesn’t go wild, when properties are bought with cash, instead of credit. All the excess liquidity went to the stock market, not the economy, so the end result was the giant wealth transfer, instead of inflation.

Low-interest rates caused wealthy people to invest, not to save, so they didn’t look at ways of building their own businesses, so much as buying back shares; wages stayed stagnant, until Trump’s victory unleashed confidence in the economy, thanks to deregulation and corporate tax-cuts, which I’d like to see happening on the individual level as well.

The U.S. continues to age, but, for the first time since the Great Recession, Millennials’ job growth dwarfs Baby Boomers’ retirement numbers. This is the backdrop for the tick-up in wages, and it will continue. Due to low-interest rates, Millennials will either buy homes, realizing the American Dream, or, because of their trauma with the 2008 housing crisis, which they experienced as teenagers, decide to put their money to work elsewhere.

Either way, credit will be extended to this generation by the banking system, which will lead to a decade of higher levels of inflation, going forward.

But, as we’ve seen, inflation isn’t the sole catalyst for mining stocks to detonate and commence on a cyclical bull market.

What I want to see is inflation continuing the trend, going up every month, until hitting 3.5%, officially, at the same time as the Federal Reserve announcing that Quantitative Tightening is over.

This is the missing link, the magic formula for these bargain-priced, small-cap companies to run like the tigers in Africa. Because high inflation levels are bad for the traditional markets; investors will start to look at alternative investments, at the same time, as interest rates remain historically low, so bond yields won’t attract investors either.

In that environment, where neither growth stocks, nor bonds are compelling investments, mining shares are the ideal play.

[contact-form-7 404 "Not Found"]
Legal Notice:
This work is based on SEC filings, current events, interviews, corporate press releases and what we’ve learned as financial journalists. It may contain errors and you shouldn’t make any investment decision based solely on what you read here. It’s your money and your responsibility. Information contained in this profile was extracted from current documents filed with the SEC, the company web site and other publicly available sources deemed reliable. The information herein is not intended to be personal legal or investment advice and may not be appropriate or applicable for all readers. If personal advice is needed, the services of a qualified legal, investment or tax professional should be sought.Please read our full disclaimer at WealthResearchGroup.com/disclaimer