In the past four days, I’ve been a guest on three major shows on YouTube and have been invited to speak at a number of investment conferences and radio shows because of Wealth Research Group’s major, new theme: “The Last Great American Decade.”

I will be personally traveling to Asia this November and December and January of 2019, to truly get a grasp of what I refer to as the destruction of The Great Wall of Chinese Economic Isolation.

You see, many centuries ago, China was already the world’s superpower, but like many other nations, corporations, and even individuals, who experience a sudden rush of wealth, as the Chinese did at one point, they mismanaged their growth.

We see it all the time in the stock market. In fact, the Oracle of Omaha, Warren Buffett, is having great difficulties adjusting to the size of Berkshire Hathaway. He has said many times that it’s much easier growing $10M into $10B than to deal with Berkshire’s $500B current market cap.

China decided, many centuries ago, to close itself down to outside visitors by building a physical wall. It also closed its borders, though, to the influx of ideas, wealth, ingenuity, and culture from other centers.

It knows not to make the same mistake again, so while the U.S. currently has to deal with how to rearrange its globalist aspirations, which, in hindsight, only benefited the country’s richest demographic levels and decimated the middle-class by exporting millions of jobs offshore, China has embarked on what could only be described as the true birth of “The Asian Century.”

Starting next year, as my first-born daughter turns three, I’ll be getting a tutor to teach both her, my wife, and I languages practiced by the Chinese, as I see this as a great competitive advantage, going forward.

China is not what it is portrayed in the U.S. media, which is planting in your mind unrealistic notions and doing you a great disservice.

As we published this past Friday, Wealth Research Group sees a major rally coming to the U.S. stock market.

If you haven’t already, immediately research the Chinese One Road, One Belt Initiative because most have an innate tendency to believe the future will be quite similar to their recent past, a notion, which will hit you like a giant meteor out of nowhere. 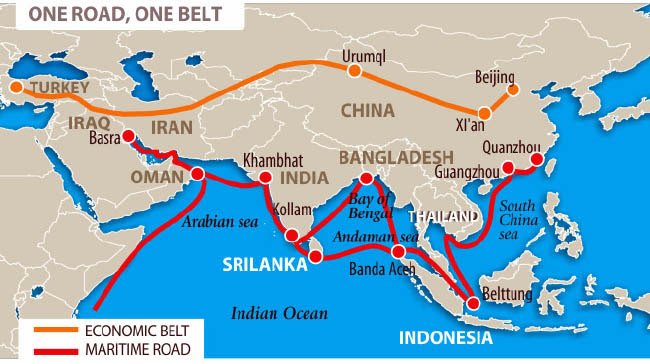 Incremental changes, subtle ones, are the most destructive ones.

Think deeply about your life, thoroughly assessing your current situation and make sure that you are in the driver’s seat because the next ten years will not resemble anything we’ve ever undergone.

I’ve seen how frogs are prepared in restaurants – it’s an incredible tragedy, accompanied by a great life lesson. Instead of putting the living frog into a pot of boiling water, which will immediately trigger the warning signals throughout its entire nerve system, causing it to panic, attempting to escape and possibly losing control over its systems, chefs put the frog in soothing temperature waters, slowly boiling the pot, so that it won’t perceive the danger until it’s too late.

In the very same way, there are countless, ceaseless, and ongoing distractions engulfing you from every which way, daily, keeping you away from your big goals – you need to reject them wholeheartedly and embrace a wealthy destiny. 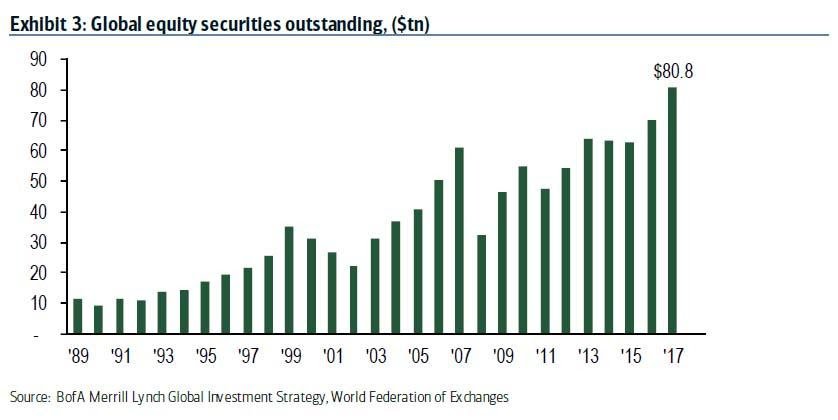 In the past nine years alone, the world has grown by close to $90T in equity.

You must grab your share of this growing wealth pie, which will continue to compound.

Yes, there will be hiccups, but don’t bet on the demise of the world – simply protect yourself from systematic leverage by owning a sufficient amount of precious metals, in physical form, duffle-bags of cash, and cold storage cryptocurrencies. Focus the majority of your time, energy, mind power, and resources, though, on becoming rich, so that no government or elitist institution, with agendas of its own,  can ever temper with your lifestyle.

Ahead of us, because of fundamental strengths in the late cycle economy, or purely due to reasons of a lack of other investment alternatives, is a stock market rally.

Just like the previous tops, we expect an eruption soon, and hedge-fund money is placing trades already, contrary to the retail investor, who keeps waiting for a crash before putting money to work.

China’s aspiration to become the greatest empire the world has ever known is about 17 years away from becoming a reality.

Many opportunities exist in supplying its hunger for raw materials, technology, Artificial Intelligence, and knowledge.

Wealth Research Group will be at the spearhead of this opportunity – mind-blowing profits will keep coming our way. 2017 saw us making as much as 90-fold returns with cryptocurrencies, but the cheese is moving, and we mustzig when the market zags.

Opposites are meeting, colliding, as the U.S., which is known for open borders, becomes protective of its domestic industries, while China, which had closed its doors to foreigners, is presenting the world with an initiative to connect China to the unbelievable potential the 21st century holds for us all.