Politicians had sold out America’s middle-class a long time ago.

As the U.S. was able to come out on top after WW2, the ability to print currency and fall into debt, left foreign governments and their taxpayers stuck with the bill.

Of course, the average person doesn’t even know what the Federal Reserve is.

Most people, who are sold the “American Dream,” are not aware that debt, in the form of fiat currency, is a slavery entrapment.

When I was 17, a 38-yr old investor, who worked out at the same gym, sat me down and explained how money works. This was 16 years ago, in 2002, and some of his words have stayed with me to this day.

Without even knowing it, he had a bigger impact on my life than almost anyone else has. He started the conversation by asking me if I knew where money came from and who decided how much of it there was to go around.

It turned into a five-hour dialogue, and I made him promise that we’d continue the conversation the following morning. I was astounded that my parents had no interest in this, or any of my classmates. I realized, right then and there, that most people lived their entire lives without mastering the skills of wealth creation, investing, and finance.

It is unfortunate, and it is the sole reason behind the launch of Wealth Research Group two and a half years ago.

My philosophy in life is that becoming wealthy is a top priority. No matter what your innate passions are, be it fine dining, a luxurious home, more time with your family, spoiling your loved ones, traveling the globe, enjoying sports, or having time to indulge in your favorite hobbies – all things in life cost money.

It is a reality that must be addressed. The sooner we realize that all personal development on the three facets of the human experience – bodily, intellectually, and spiritually, requires the unrestricted use of money to maximize our potential, the more disillusioned we would be regarding what our responsibility is to ourselves and our loved ones.

Prioritizing, then, is essential. Time management will pay big rewards, when you master it.

As you know, healthy sleeping habits for adults are between six and eight hours, so this leaves us all us with 16 to 18 waking hours every day.

Divide those into activities, which take you to the next level and those that don’t and are pure entertainment.

Resting, relaxing, and letting my mind meditate, takes about 90 minutes a day, and I definitely adhere to that.

The one strategy, which I’ve found most useful for me, is to concentrate on limiting the number of income-producing routines in my life.

I delegate all other actions that require me to stray away from my core routine. This is a critical decision, which has allowed me to specialize.

The major prerequisite for making this work is an ability to trust others.

I choose to trust others in all the ventures I pursue, but in no place has this decision provided greater leverage and bigger results than with investments.

Putting money at risk is a necessity in order to grow it. In the natural resources business, all companies are selling the same end product, be it gold, silver or otherwise. So, finding the right people is the only game in town.

For me, Keith Neumeyer, who has championed the copper, zinc, silver, and gold markets is that anchor.

Silver is being heavily shorted at the moment. Once the covering of shorts intensifies, silver could easily pop above $18.00, which is a psychological statement, and it sends a clear signal to money managers that oil prices are forcing miners to raise prices.

Keith Neumeyer has learned to delegate as well. One of his companies employs 4,000 individuals, and in four to five years, First Mining Gold will be a major source of jobs for Canadian workers, as the company looks to advance Springpole into production.

When money inflows from funds hit the junior mining sector, this company will be able to capitalize better than anyone else, in parallel, advancing five top-notch projects into production. Shareholders will be rewarded for their faith in Keith and his team for the third time in his career.

Mr. Neumeyer and I met in Costa Rica a week ago and recorded a one on one session focusing on First Mining Gold. 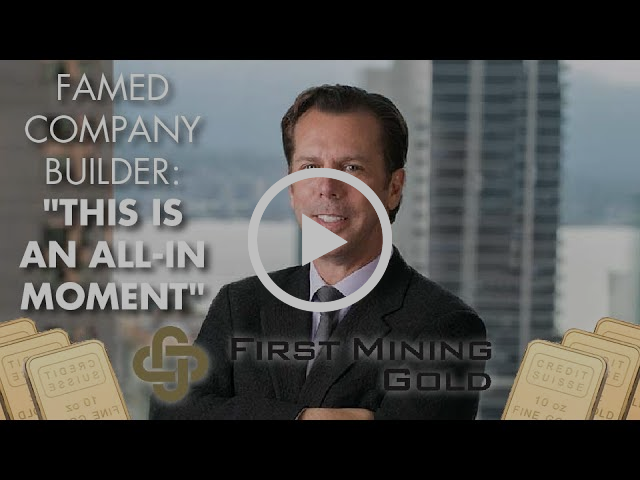 This work is based on public filings, current events, interviews, corporate press releases and what we’ve learned as financial journalists. It may contain errors and you shouldn’t make any investment decision based solely on what you read here. It’s your money and your responsibility. The information herein is not intended to be personal legal or investment advice and may not be appropriate or applicable for all readers. If personal advice is needed, the services of a qualified legal, investment or tax professional should be sought.

Never base any decision off of our advertorials. Wealth Research Group stock profiles are intended to be stock ideas, NOT recommendations. The ideas we present are high risk and you can lose your entire investment, we are not stock pickers, market timers, investment advisers, and you should not base any investment decision off our website, emails, videos, or anything we publish.  Please do your own research before investing. It is crucial that you at least look at current SEC filings and read the latest press releases. Information contained in this profile was extracted from current documents filed with the SEC, the company web site and other publicly available sources deemed reliable. Never base any investment decision from information contained in our website or emails or any or our publications. Our report is not intended to be, nor should it be construed as an offer to buy or sell, or a solicitation of an offer to buy or sell securities, or as a recommendation to purchase anything. This publication may provide the addresses or contain hyperlinks to websites; we disclaim any responsibility for the content of any such other websites. We have been compensated by First Mining Gold, five hundred thousand options for a one year agreement. We have previously been compensated six hundred thousand options for past years agreements, none of our options have been exercised. In addition to options we are currently managing a marketing budget of two hundred and fifty thousand dollars, paid for directly by the company. We are currently in a one year agreement with First Majestic Silver, we have been compensated with twenty five thousand options, and thirty thousand dollars. For prior expired agreements we received an additional fifty thousand options, none of which have been exercised. Please use our site as a place to get ideas. Enjoy our videos and news analysis, but never make an investment decision off of anything we say.