For the past couple of weeks, I’ve been GETTING BOMBARDED by data that is ALL ABOUT gold reaching euphoric demand levels; other traders have been warning of too much buying frenzy. This ALWAYS happens just before INTERMEDIATE or FULL-CYCLE tops.

But, these COMPARISONS to previous peaks in price are NOTHING SHORT of irrelevant this time around.

Other camps include those that are predicting deflation and gold prices of below $1,000/ounce. Those who SENSATIONALIZE are in the business of selling HYPE or simply have no idea – LITERALLY ZERO COMMERCIAL SENSE – of how the dynamics of the global credit system work.

Since the INCEPTION of the fiat monetary system in 1971, DEFLATION has only been felt in CRASHES and those have been IMMEDIATELY inflated back to normal stress levels.

If gold were to collapse down as it did in 1980, going from $850/ounce to $250 by the year 2000, you’d have to see interest rates going up SUBSTANTIALLY. Rates will NOT be raised at the same time as DEFICITS are entering WW2 levels. This will NEVER happen, but if it did, the world’s systems would END as we know it and the price of gold will be the least of your worries, since societies will literally crumble.

In 2008, gold’s price crashed as well, when the LEVERAGED-TO-THE-MAX lending facilities melted down in margin call mania. In the March 2020 period, there wasn’t ANY commercial banking house EXUBERANCE and the four major banks (BofA, Citi, JPMorgan or Wells) aren’t even distressed.

The demand for physical silver WENT DARK, as soon as Donald Trump DEFEATED Hillary Clinton for the office of President, so it makes sense that we have plenty of demand, in light of recent events.

This is clearly shown below: 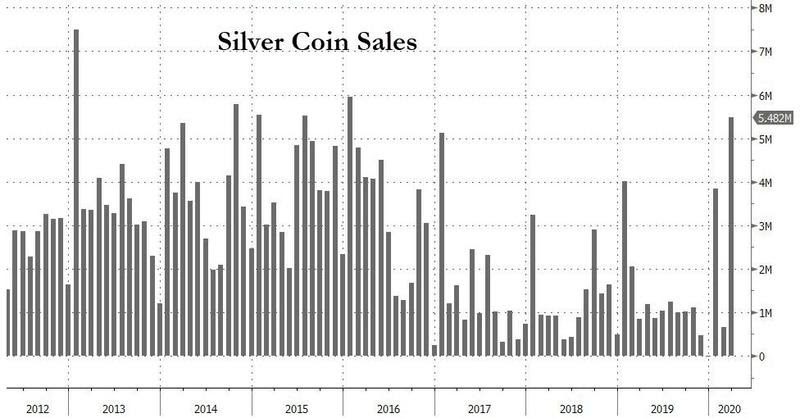 The demand for silver MAY HAVE exploded in March, but CUMULATIVELY SPEAKING, it is far lower than in the Obama years. The industry was DEAD for 3-4 years STRAIGHT.

The last time two times this OCCURRED, gold returned hundreds of percent in seven years and 166% in three years.

Billionaire investor Paul Singer, who is known as the MOST BRUTAL man in the hedge fund industry, has now said that “GOLD IS BECOMING CENTER-STAGE.”

He is known as the Vulture Capitalist on Wall Street, especially after taking the governments of Peru and Argentina to court for DEFAULTING on bonds. Paul Singer has entered the gold market in the past few years, and RODE the 70% gains since the December 2015 bottom, JUST AS WE HAVE DONE.

Like me, he believes this is only the beginning for gold.

Below, you’ll see that the concentration of the top 5 components of the S&P 500 now weighs 22% of the index. This has never happened before, but MORE IMPORTANTLY, notice that each and EVERY TIME this phenomenon has occurred, gold PROCEEDED to make GIGANTIC returns in the years that follow 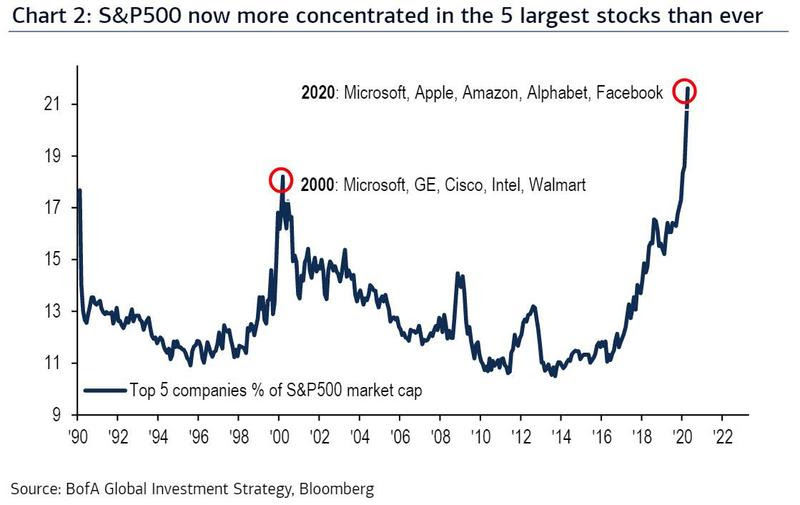 Since the market’s peak on February 19, the gold mining industry has RETAINED its earnings power, as opposed to other FROZEN ones.

Yes, there’s been a surge in demand for coins and for gold stocks, but the FUNDAMENTALS suggest this was just an initial SPARK, not the closing bell. 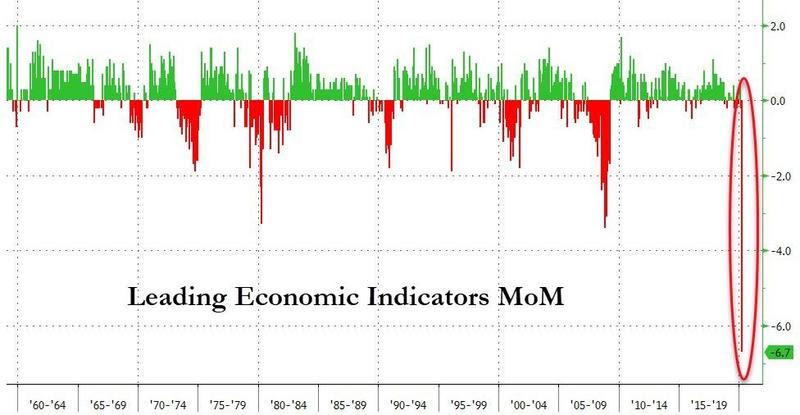 The problem with MOST PEOPLE is there is bias toward remembering only the SHORT-TERM PAST.

Most haven’t really let it sink in that we’re in a depression, BECAUSE it all happened so suddenly.

Covid-19 is going to RAISE EYEBROWS in other sections of healthcare as well. The banning of pollution and gasoline cars will intensify, which will put supply constraints on copper, for instance, which is of VITAL IMPORTANCE to Electric Vehicles.

Coupled with the fact that it is ESSENTIAL for the $2T infrastructure program, copper has been found to be efficient in treating the virus.

In a matter of months, perhaps only WEEKS, hedge funds will understand that the SYSTEM HAS BEEN SAVED (for now) and begin deploying their RECORD CASH levels, on behalf of their clients.

Positioning AHEAD OF THEM will determine results. Therefore, in a matter of days, we’re going to profile a TOP-RANKING opportunity, which is currently PRICED AT A 90% DISCOUNT, compared to peers. This is no joke.